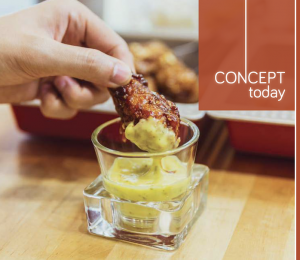 It appears that people in Southeast Asia first domesticated the wild ancestors of today’s chicken. Whether or not chickens were eaten the right way, there are certainly theories that chicken at that time was rather revered and considered divine. Despite the reverence, fried chicken first started appearing on the royal tables of Asia, the Middle East, and West Africa. Even at that time, a twice-cooked approach was adopted, braising chickens after quickly frying them – a technique certainly familiar to Korean fried chicken today. 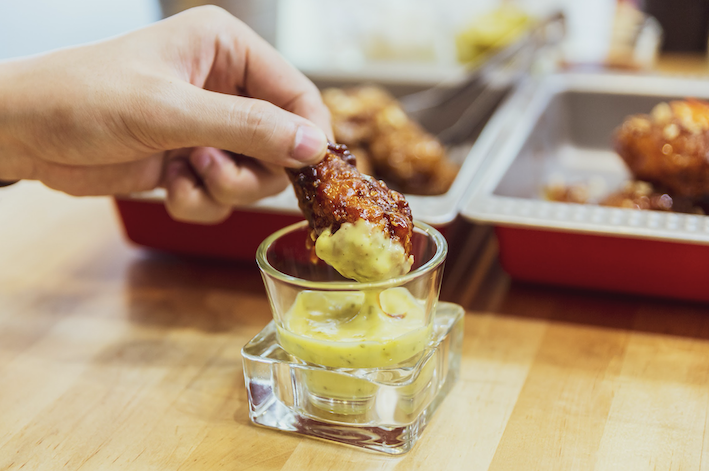 The earliest written recipe for fried chicken high likely came from a British cookbook published in 1747 by Hannah Glasse – The Art of Cookery Made Plain. The recipe almost immediately became a hit in the country and among its colonies, a fame which later spread across the American southern states. At that time, fried chicken was regarded as “butchered pieces of chicken to be floured and fried in hog’s lard”.

SO HOW DID FRIED CHICKEN MAKE ITS WAY TO ASIA?

First introduced to American-style fried chicken during the Korean war between 1950 to 1953, Koreans took a while to warm up to the idea of eating fried chicken. Koreans who were accustomed to steaming their chicken were introduced to the concept of frying battered pieces of chicken by American troops who were stationed in South Korea during the late 1940s and early 1950s. But it’s only a few decades later that fried chicken took off in the country following the end of the war. 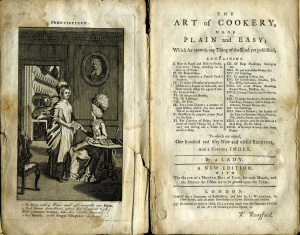 As the war brought impoverishment upon South Korea, Korea struggled to develop economically during the 1960s. Chicken was becoming more expensive and the average household income was dwindling. Thus, not many were going out for chimaek (“chi” from chicken, “maek” from the Korean word for beer). Yet, it wasn’t the end of the era for fried chicken in Korea. On paydays, workers would bring home whole rotisserie chickens bought at local markets, packed in yellow bags to share with loved ones. It was the same time the rotisserie oven arrived in South Korea, incepting the first foothold for chicken in the cultural conscience of the country. What seemed like an indulgence or once-a-month luxury snack, then became a sensation when cheap cooking oil arose in the market, alongside the take-off of household income at the beginning of the 1970s.

At the same time, the “Miracle on the Han River” emerged, a period of rapid economic growth in South Korea following the Korean War. Cheap cooking oil became widely available to accommodate new ways of cooking. Domestic chicken production began to ramp up making chicken more affordable. Disposable income resurged, directly leading to higher chicken consumption for average Korean households. As a result, families began to prepare their own fried chicken – seasoning and coating their fried chicken in flour before dunking it in hot oil.

The movement continued as Kentucky Fried Chicken (KFC) penetrated the peninsula, exposing Koreans to a variety of chicken meals. During this time, the type of fried chicken that was being sold often came with a thicker breading. It wasn’t until the late 1980’s that fried chicken in their current form in Korea started to appear. Ambitious entrepreneurs too, began to join the movement to serve the growing demand for fried chicken. Some began to set up their own restaurants which led to fierce competition without no single definitive recipe. Chicken was once considered a delicacy in Korea, stewed whole with dates and ginseng and reserved for special occasions. Their growth was bolstered by the financial crisis of the late 1990s – some who lost their jobs turned to opening chicken joints.

Lim’s Chicken aced through, opening the first fried chicken franchise in Korea in 1977. Lotteria joined in two years later by selling individual pieces of chicken. The movement grew and turned into an era what we know as the earnest beginning of fried chicken in Asia.

There are approximately 87,000 fried chicken restaurants in South Korea alone, according to a report in the Korea Economic Daily. In comparison to 38,000 McDonald’s and 43,000 Subway outlets worldwide, the number of Korean fried chicken being sold in the nation alone is definitely something worth the boast. Plus, in the recent years, the Korean fried chicken phenomenon has gone full circle, with more stores opening in the U.S.

The top Korean fried chicken names in South Korea are Mexicana Chicken, Pelicana Chicken, Kyochon Chicken, and Genesis BBQ amongst other top 15 restaurant outlets known for their fried chicken delicacy. Some theorise that the boom was also a part of the Korean drama sensation such as My Love from the Star and even the 2002 World Cup. What we do know is Korean fried chicken has become a popular food offering served with soju or cold beer, defining a culture of its own. Koreans even came up with a new word for the combo of fried chicken and beer – chimaek; promoting beer and fried chicken as a perfect match.

Likewise, in the culinary world, chefs have learned to experiment Korean fried chicken by adding different textures to chicken wings, driving the interest of foodies while elevating the simple dish to warmth, relevance, and perfection, alongside reinventions of flavours. It looks like Asian flavours have been pushing the bounds of culinary for good, and Korean fried chicken is certainly in the list.