By Eileen ChanSeptember 24, 2016No Comments

Let’s say you are a fan of islands and every travel opportunity involves one. Assuming you tick off an island a day, it will still take approximately 35 years to set foot on every single one in Indonesia. At last count, the National Coordinating Agency for Survey and Mapping puts a whopping 13,466 islands in the country! Of course, not all islands are fit for inhabiting but the sheer number indicates how big the world’s largest island country is. With an estimated population of 260 million, and Jakarta’s infamous traffic in equal tandem to Bali’s fame of a holiday paradise, brands are increasingly looking to make a mark here. Indonesia’s tourism profile has risen as well – new spots unearthed, an advantageous currency rate and the culture of hundreds of ethnic groups await to be experienced. 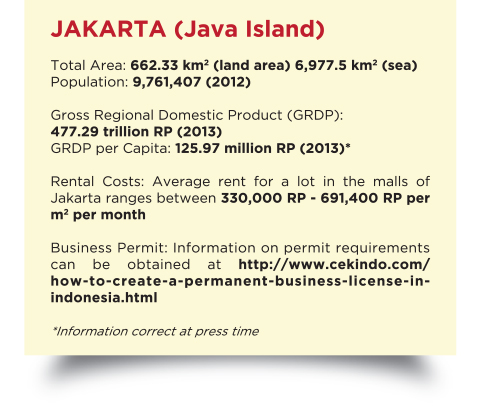 On the business opportunity side, there is a growing interest from foreign investors as the country is now open to a 100% foreign ownership of industry cafes and restaurants which can boost Indonesia’s workforce when these investors hire local labour. Also, for its food-savvy citizens constantly in search of the new ‘wow’ and the travel thirsty; Indonesia brims with potential and the food industry knows
it. Therefore, it helps to be prepared before YOU enter this vast expanse of land. With over 90 cities in Indonesia, we have picked a few major cities that can represent the country’s landscape and possibility for F&B operators to consider. Due to the immense data; Foodbiz Landscape: Indonesia Part 2 continues in Volume 17.

Indonesia’s capital city is the country’s most populated and its economic growth was ranked 17th among the world’s 200 largest cities; a huge leap from its 171st place in 2007! In the 2012 Globalization and World Cities Study Group and Network (GaWC) research, it was listed as an alpha-global city as well. Any capital city in the world would be targeted for business exchanges and evidently so in Jakarta. However, tourism has its place particularly from the domestic market. In 2012, the tourism sector contributed 2.6 trillion rupiah to the city’s total direct income. With fellow Indonesians from other islands plying a living in Jakarta, the F&B industry is vibrant as consumers are food and trendsavvy always eager to try new things. Not surprising that modern restaurants, cafes and international brands flock here to capture the citizens’ attention.

SUDIRMAN CENTRAL BUSINESS DISTRICT & GADING BATAVIA FOOD PROMENADE
There is a good mix of local cuisine and more modern cafes around these areas making it a select spot for those looking for reasonably priced foods as well as, perhaps a more mellow atmosphere to while the night.

JALAN THAMRIN
With hotspots like the Jakarta Theatre building, Sarinah department store, Plaza Indonesia along the road; surely one would be able to find something to eat no matter the taste or budget. No doubt food entrepreneurs will find this location an opportunity to attract diners. 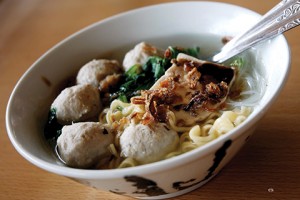 BAKSO [RP 15,000 ONWARDS]
Also a familiar sight all over the country, these are meatballs made from ground beef paste and tapioca flour although shrimp, chicken or fish can be used. They are served in a broth with noodles and many Jakartans like to add some chili sauce into it. 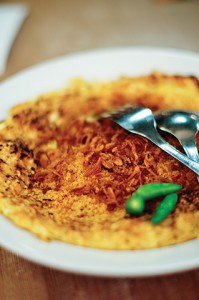 KERAK TELOR
[RP 10,000]
A substantial meal made from glutinous rice fried with duck egg, topped with fried shallots, dried shrimp and shredded coconut. It is a traditional Betawi snack and was considered to be food for the wealthy in the past.

MARTABAK MANIS [RP 55,000 ONWARDS]
Call it Jakarta’s most popular treat, it is easily found along the streets. The thick pancake holds a spread of margarine and can be filled with your choice of chocolate sprinkles, cheese and peanuts even Nutella.

KETOPRAK JAKARTA [RP 10,000 ONWARDS]
A very common street food, it is composed of beancurd, compressed rice cake, vermicelli, boiled egg, bean sprouts and cabbage. Peanut sauce and fried shallots are poured over with crackers on the side to wipe up the sauce. 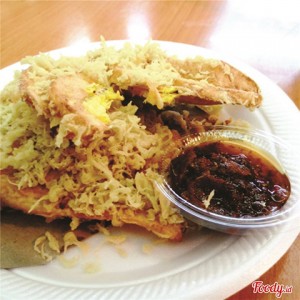 FRIED BANANA WITH CHILI [RP 13,000 PER PORTION]
Yup, its a sweet-spicy composition that works. Moderately ripe bananas are coated in batter and deep fried and then you dip it into a chili sauce made with fish and locals also love the crispy batter bits. 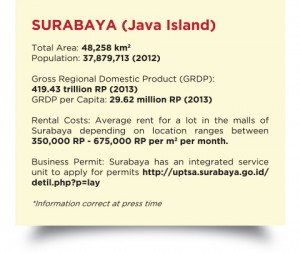 Being the second largest city behind Jakarta, Surabaya has etched its position as the natural choice to set up a business; giving any visitor an impression that “its just another concrete jungle”.

Yet, it is the foundation of Indonesia’s independence and Surabaya’s moniker is Kota Pahlawan which translates to “city of heroes” hence the many related statues around the city. Aside the business hub, Surabaya has a relatively rich Arabic landscape, one of the country’s biggest Chinatowns and Dutch buildings left behind from its colonised days. Although the city has been under the influence of the Dutch and Japanese, its culinary preferences seem to hover to traditional delights as seen in the list below.

LONTONG BALAP [RP 15,000]
Rice cakes in a broth with numerous accompaniments. The word ‘balap; meaning ‘race’ is a reference to the older generation of ‘lontong’ sellers who used to carry two clay frying-pans on each end of a big bamboo stick to move quicker which also provoked friendly competition (race). 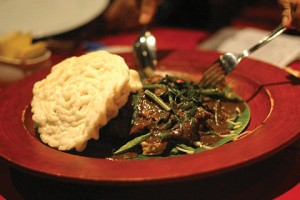 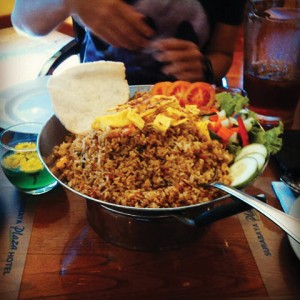 NASI GORENG JANCUK
[RP 125,000]
A huge portion of fried rice, it was said to be created by a tired chef who was not very happy to prepare a special meal for the staff. He uttered “jancuk”; which is loosely translated to a curse word. He then fries up a huge pan of rice with a hot sauce and added so much birds’ eye chilli which made the diners exclaim “Jancuk pedese!!

If you’re having a late night and feeling the hunger pangs, some of the city’s food operators will keep you satisfied as they open from late night till dawn. Here are some of the most popular stalls for midnight cravings people queue for.

MANG DUDUNG CHICKEN PORRIDGE [RP 10,000]
Chicken porridge, served piping hot with a raw egg and optional intestines while the crunch from crackers adds another dimension to the soft porridge. Opens around 11pm or 12 midnight.

SEGO SAMBAL MAK YEYE [RP 10,000 ONWARDS]
It’s the sauce that drives people to substantiate their appetite at 10pm. The spicy condiment can be taken down a notch with sugar and is deemed the ideal partner to white rice, sting-ray, egg and tempeh (fermented soy cake). 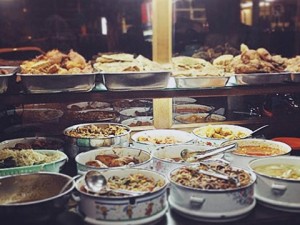 PECEL AMBULANCE BU HANA [RP 20,000 ONWARDS]
Morbid? Yet, the “ambulance” relation is simply because of the ambulance siren in front of the stall’s vehicle. Salad of mixed vegetables (pecel) in peanut sauce dressing is served with rice or rice cake that can be accompanied with meat dishes, egg, intestine dishes and many others. 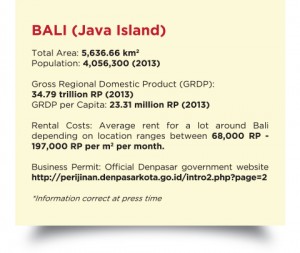 Who has not heard of Bali? The tourists’ paradise famed for clear seas, sandy beaches, temples and a wealth of local culture makes its capital, Denpasar, an often searched destination on airline websites. Though there may be other islands striving to share its fame, Bali does not seemed to be fazed.

When the country announced its policy of opening up 100% foreign ownership for F&B outlets, a popular Australian restaurant already expressed interest to invest up to RP 10 million. In Bali, there are areas you would go for specific attractions such as private villas in Seminyak, the city life in Kuta, rice paddies and arts / crafts in Ubud, luwak coffee in Kintamani and the volcanic Mount Batur. Despite the tourist influx, food in Bali is still decidedly local enough especially if one is a food adventurer. 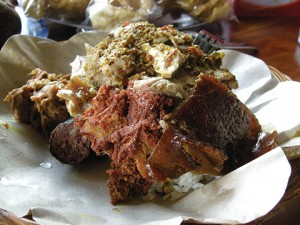 NASI AYAM KEDEWATAN IBU MANGKU [RP 15,000 PER SERVING]
Some say you have not experienced Bali if you haven’t tried this Chicken Rice. Since 1970, the recipe is unchanged and a portion consists of shredded chicken, vegetables, hard boiled egg, chilli sauce and a sprinkling of roasted peanuts that adds a unique quality to its taste and texture.

BABI GULING [FROM RP 40,000]
Literally translated to ‘rolling pig’, the entire porcine is grilled over open fire, rotisserie style and is one of the must-eats on every Bali eating guide. Customers can opt for a platter of mixed parts of pork or specific parts – the extra kick is in the sauce.

NASI JINGGO [RP 6,000 PER PACK]
Definitely the food choice for the budget-conscious, the fist-shaped rice is topped with slices of shredded chicken, noodles, shredded coconut, fermented soycake (tempe) and a spicy sauce before being wrapped with banana leave. 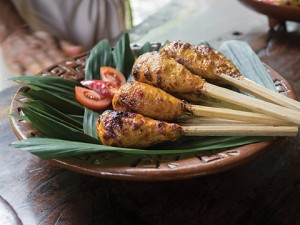 SATE LILIT [FROM RP 12,000 / 10 STICKS]
Grilled meat skewered on bamboo sticks is not novelty but the ‘lilit’ version might be different. Instead of sliced meat, minced meat is marinated, wrapped around lemon grass or bamboo stalks and grilled. Balinese are famous for their ‘sate lilit’ of mackerel fish.

LAWAR KUWIR [RP 30,000]
Pork, duck or chicken are spiced and steamed before being mixed with shredded coconut and jackfruit and a mixture of special spice paste. This mix is appetising with steamed rice and may be served with a broth at some places. 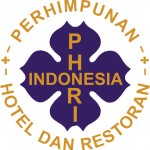 Hotel dan Restoran Indonesia (PHRI) / Indonesian Hotel and Restaurant Association (IHRA)
PHRI is a non-profit association with members comprising hotel owners, restaurant owners and professionals working together to grow the key sectors of the tourism industry in Indonesia.It works with the government to create policy(s) structured to the real needs of the industry .
According to PHRI’s head, Mr Hariyadi Sukamdani, the industry is pleased that President Joko Widodo has made tourism a priority, in addition to infrastructure, food, energy, and maritime. “It’s a new way for Indonesia to oversee the welfare of the community through sustainable tourism,” said Hariyadi.
www.phrionline.com/index.html 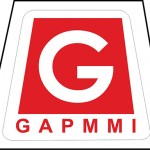 Gabungan Pengusaha Makanan dan Minuman Indonesia (GAPMMI) / The Indonesia Food and Beverages Enterpreneurs
Established in 1976 on the basis to create awareness amongst the business community to promote food in Indonesia. Through public advocacy, network development in both the local and international arena and collaborations with the Indonesian Government, GAPMMI’s long-term aim envisions to create a condusive business climate through friendly and healthy competition. The association welcomes anyone in the industry including F&B processing, importers / exporters of food products, suppliers, distributors and retailers.
www.gapmmi.or.id

Since 1996, Fi Asia has been part of the Fi (Food Ingredients) portfolio focusing on the Southeast Asian food industry. The show is rotated between Thailand and Indonesia while smaller summits have been introduced in Vietnam and the Philippines. Fi Asia brings together the leading food and beverage professionals from all over the world. Fi Asia 2016 expects over 15,000 attendees and more than 650 leading food and beverage suppliers to Jakarta.
21-23 SEPTEMBER 2016
JAKARTA INTERNATIONAL EXPO
www.figlobal.com/asia-indonesia/

The dedicated B2B platform for the F&B industry is brought to you by SIAL GROUP; the world’s largest food exhibition network with 50 years of experience and INTERFOOD, the leading food and beverage exhibition in Indonesia, running for 14 years. 28 product categories related to the Hospitality industry will be present for visitors to gather more information alongside the SIAL Innovation 2016 – a platform to present innovative solutions. Seminars, competitions and cooking demonstrations bring SIAL Interfood to completion.
www.sialinterfood.com