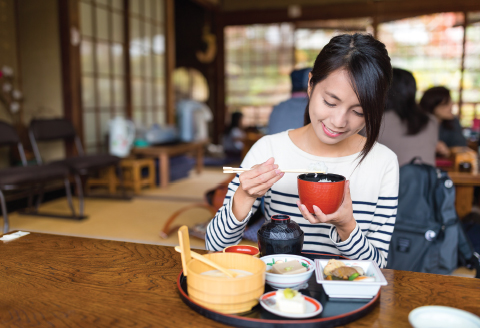 Japan is one nation widely known for its food culture. It is also among the most enthusiastic and passionate of any race when it comes to food. Turn on your television at any time of the day or night in Japan, and don’t be surprised to catch a show about food and eating competitions. In fact, the towns and cities in Japan are primarily known among locals for the local speciality they have to offer. This has made food the main motivator for many Japanese to travel, be it out of hometown or abroad.

And the pull only gets stronger. The Japanese food boom worldwide shows no signs of slowing down, reaching up to 117,568 Japanese restaurants overseas as of October 2017. According to Nippon, this is a 30 percent increase compared to the results of a similar study previously conducted in 2015, and around five times larger than the number reported in the first study conducted in 2006.

These restaurants are particularly concentrated in Asia, most especially in Hong Kong, and dispersed across China, Thailand, and the US.

Many of these restaurants offer Japanese dishes that are slightly different from what Japan traditionally offers, while some try their best in offering Japanese dishes in its purest form. Yet, one thing is certain – Japanese dishes have garnered loyalty among consumers over the decades and is continuing to do so. Some of the dishes, according to the order of popularity and based on a survey conducted in Bangkok, Dubai, Ho Chi Minh City, Jakarta, Moscow, and Saõ Paulo, covering 500 people aged 10 to 59 in each city with a total of 3,000 are: 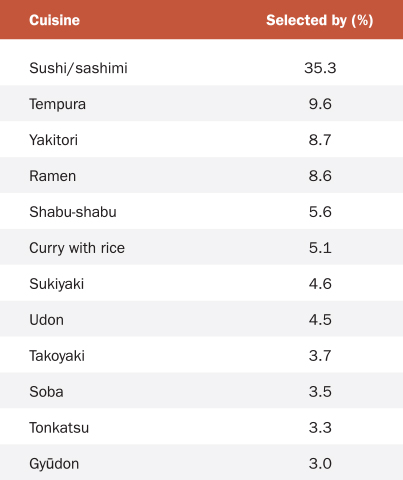 While it is not surprising that tourism is a significant factor behind the increase in demand for Japanese food, part of the increased attention also comes from a booming interest in healthy living initiatives. Mass-market restaurants in UK are actively serving Japanese food, and that’s because a third of adults believe they are healthier now than they were a year ago by eating Japanese food. Supporting the claim, a report by The British Medical Journal denoted that those who closely followed Japanese dietary guidelines showed a reduced risk of dying early and a reduced risk from heart disease or stroke. Looks like things are coming together to make sense for those who aspire to run Japanese restaurants! 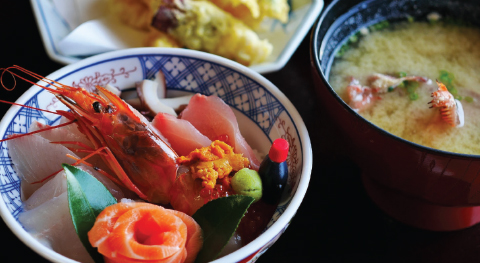 A STEP BACK INTO TIME
Before we dive deeper into Japanese restaurants, let’s take a glimpse at the history encompassing Japanese food. Sushi, tempura, and ramen are vastly known around the world – the three Japanese dishes are so recognisable that each has its own emoji. But are you aware that these dishes are only recent creations originating from the last few hundred years?

• The rise of Buddhism led to a ban from eating meat in Japan in the A.D. 700s. Sushi came about as a result of this ban.
• Sushi was a popular street food during the Edo period, from 1603 to 1868.
• Tempura, also known as batter frying was originally introduced by Dutch traders and missionaries in the 16th century.
• A favourite among blue-collar workers in the post-war era, ramen originally came from China in the early 20th century.
• Japanese cooking styles became simpler in the 1800s. A range of vegetarian foods without meat were served in small portions, using one standard cooking technique. Foods were divided into five colour groups – red, green, white, yellow, and black-purple; coupled with six flavours – sweet, bitter, sour, hot, salty, and delicate. The Japanese continue to use this cooking system.

So then, what really is a Japanese dish? Before we find out the answer in the next segment, let’s first find out what are the other food cultures Japan is known for!

JAPANESE CONVENIENCE STORES
Let’s get real, life in Asia would appear strange at the absence of Japan’s three major convenience store operators – Seven-Eleven Japan, FamilyMart, and Lawson. These go-to stores have been expanding through their franchise stores in the region of Asia since their first appearance in the 1970s in Japan. Now, they are going beyond the traditional measures of a convenience store – the stores offer copiers, ATMs, and even accept payments for utility bills. Instead of depending on rice balls, box lunches (bentos) and other food and drinks items are making up a large part of their business.

After all, with the multiple openings of FamilyMart in Malaysia in the recent years, Malaysians appear to have found a new spot to get their on-the-go food and drinks. FamilyMart is believed to be the second largest convenience-store chain in the world with almost 25,000 stores in eight countries. In Malaysia, however, FamilyMart Malaysia has maintained Japanese influence on its stores, while ensuring a local identity remains with its product offerings.

In its ready-to-eat food range, which were once samurai’s road snacks, there are items such as onigiri and Japanesestyle box lunches (bentos) which remain true to Japanese flavours. Then, you have the local favourites such as nasi biryani and mee siam, and other items such as salads and sandwiches. FamilyMart also offers oden, chicken karaage, dim sum, and coffee freshly prepared and served over the counter. As part of konbini offerings, there is also a wide assortment of imported and local health and beauty care products, as well as personal care products in the store.

FOOD MANGA
Food is of tremendous importance to the Japanese that it it is also recreated in the form of manga. Written by Tetsu Kariya and drawn by Akira Hanasaki, Oishinbo is a Japanese food-themed manga first published in Japan in 1983. The manga went over a hundred volumes and sold over a hundred million copies worldwide, becoming one of the bestsellers in Japan and later, a popular television show in Japan. Other popular food-themed mangas include Shota’s Sushi, Cooking Papa, Third-Generation Tsukiji Fish Market Man, Professor Genmai’s Bento Box, The Ambassador Chef, One Man’s Train Station Bento Journey, Natsuko’s Sake, and Ramen Discovery Legend. 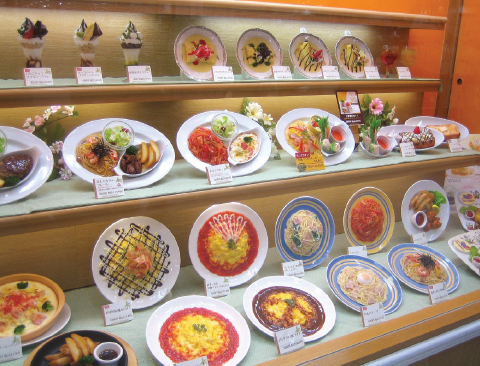 JAPANESE PLASTIC FOOD
Have you noticed the food replicas in some cafes and restaurants that lures you into buying that cake you are looking at? Well, guess what, that comes from Japan. Plastic food first appeared in the 1920s, when restaurants introduced Western food items and wanted to show potential customers what the food looked like. Japanese plastic food makers took up the challenges for themselves and began producing plastic miso soup, toast, bento-box soba noodles, fried eggs, fillet mignon, chocolate mousse, French pastries and even Big Macs. With floating utensils that sell for as much as $400 and fresh plastic salmon that goes for $1,300, customers can easily know what is on the menu by observing the displays at the windows of restaurant, snack bars, coffee shops and noodle joints. 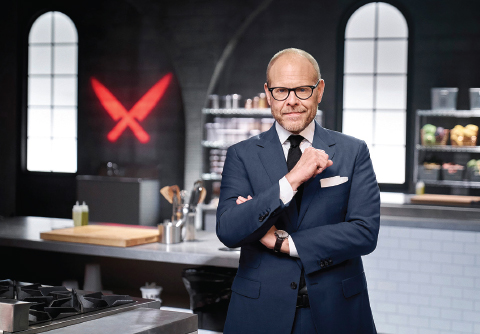 COOKING & EATING SHOWS
Iron Chef was one of the top shows in Japan in 1990s, which later became a hit on the Food Network in the United States, as well as in Israel, Australia, Britain, Thailand and other countries. The chefs perform in a “Kitchen Stadium” with about 400 ingredients and the main ingredient for every episode is announced by the show’s host, who then bangs the Gong of Fate signalling the chefs to begin their “work”.

Each contesting chef is given an hour to prepare a dish using the mystery ingredient. Iron Chef has often displayed chefs working at a furious pace, accidentally cutting themselves with their knives, tripping over TV wires, and what not. One time a chef cooked electric eel. Another time a chef extracted the essence of lobster to flavour asparagus and then threw the lobster away. 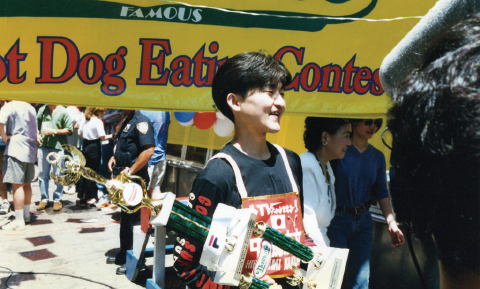 JAPANESE EATING CHAMPIONS
Do you know that many of the world’s best competitive eaters are in-shape Japanese people? The first Japanese to make a name on the international eating scene was Hirofumi Nakajima who won the 1997’s and 1998’s Nathan’s international hot-dog-eating contest in Coney Island New York. In fact, the Japanese have won some the world’s most competitive and best-paying eating competitions, some stunning defeats that have been a blow to the big men who equally eat big. Eating contests in Japanese shows are similarly popular. Food Battle Club and TV Champion were popular in Japan until 2002, not until a junior high school student died after choking on a bread while engaging in a speed eating contest with friends at lunch time.