sweets for the SOUL

When dining out, do you get excited by the prospect of dessert? Well, we do for sure and to echo Chef Robert Irvine “every meal should end with something sweet. Maybe it’s jelly on toast at breakfast, or a small piece of chocolate at dinner – but it always helps my brain bring a close to the meal.”For many of us, we are able to justify some cake claiming the existence of a “dessert stomach” no matter how full we are. Turns out that biology does have something to do with it. We’ve illustrated the findings of a study carried out by Arnold Berstad and Jørgen Valeuron how we are apt to want to sooth the sweet tooth.

WHY YOU MAY HAVE A “DESSERT STOMACH”
While some sugar is necessary for bodily function, it should come from natural sources. In this regard, dessert is then nutritionally unnecessary therefore our want for it could only be from a cultural standpoint said Michael Krondl, author of Sweet Invention: A History of Dessert. He traveled through India, the Middle East, Italy, France, Austria and the United States; referring to these areas as the 6 dessert superpowers. For example, India was abundant with sugar cane and as a place where major civilisation took place, people thought of ways to invent goodies with the sugar. Being a shipping hub of spices and edible goods, Venice naturally brought in sugar and Americans made up the largest population of sugar consumers in the world.Slowly but surely, the world followed suit and many countries are proud of their homegrown inventions and desserts have taken a special spot as a must-have item during festive or celebratory occasions. From India’s Gulab Jamun to Germany’s Christmas cookie called Lebkuchen, it proves that the sweet tooth is universal and adds a delightful touch to an occasion celebrated with food.

THE SWEET PERCEPTION
While Generation X or baby boomers experienced dessert as a luxury, the millennial looks at it as a social and culinary experience-dessert should be expected and at times a basic chocolate cake might not cut it. According to the Culture of Millennials 2011 report from The Hartman Group Inc., millennials don’t think too much about when they have dessert. No longer is it strictly at the end of a special meal but anytime can be dessert time hence the proliferation of businesses set up to accommodate these demands – small portions, affordable and accessible. Not to forget, one that gets them lining up at your doorstep and that will appear on social media. Here are some of the popular ones that have struck the world in recent years:

HYBRID INVENTIONS
What if you could have the best of both worlds in one mouthful? That must be the driving force of these creations: 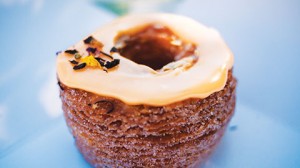 Cronut: Created by Chef Dominique Ansel in 2013, one should not think it a mere deep fried croissant posing as a doughnut.

The Biskie: London’s Cutter and Squidge bakery brings together biscuit, cookie and cake in one bite-sized morsel. 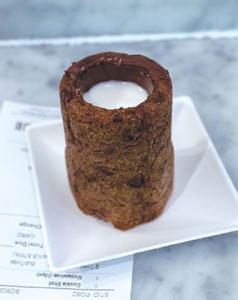 Cookie Shot: Another Dominque Ansel creation where he baked a chocolate chip cookie in the shape of a shot glass and filled it with vanilla-infused organic milk.

Brooksters:If you’ve ever wanted a brownie and chocolate chip cookie at the same time; Baked in New York City has the solution for you by baking a chocolate chunk cookie inside a brownie tart-like shell.

Mallomac:Marshmallow meets macaron made by Dana’s Bakery, New York City. It features a brown sugar meringue cookie and a marshmallow coated with a chocolate shell.

CROSSING FLAVOURS
What was once a realm for sugar-based stuff is no longer so when herbs and spices traditionally used in savour y cooking made their way into our desserts. Think chilli chocolate, ginger ice cream, black pepper and cardamom ice cream or salt-npepper cookies.

HEALTHY SWEETS
Domestic homemakers have baked with vegetables for a long time but it is only recently that we are seeing more beetroot cakes, rhubarb, zucchini cakes as well as gluten-free options in the market. For cold desserts, frozen yoghurt (froyo) has become a darling as the lower in fat option.

ASIAN TAKES
While we might enjoy a slice of cake or pastry at times, the people in Asia has their own way of having sweet foods. Many are evergreen and perhaps the only progression is businesses shifting from roadside or hawker stalls to airconditioned coffee shops but they are still going strong. Let’s see if you are familiar with any of these: 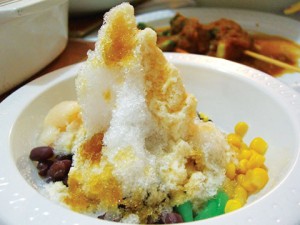 The Shaved Ice Foundation
Many Asian countries serve their own idea of toppings on shaved ice depending on their local ingredients. In Malaysia and Singapore, people order Ice Kacangthat comes with red beans, peanuts, corn, grass jelly and flavoured with brown or red sugar syrup alongside evaporated milk.

Cendol is another popular item but has lesser ingredients with only coconut milk, palm sugar, strands of green jelly and red beans poured over finely shaved ice.

Bingsu is a current wave for shaved ice dessert with stores popping up in Singapore and Malaysia. Originating from Korea, it star ted with only red bean paste, ground nut powder and tteok (rice cake) and was only eaten by government officials. Now you can have chocolate, green tea, strawberry and many other bingsu flavours.

Sweet Soups
Better known by the Cantonese-speaking community as ‘Tong sui’ (literal translation being sugar water); it is a collective term to describe sweet items in semi-liquid or liquid form ser ved at the end of the meal. You’ll hear people in Malaysia, Hong Kong and Singapore ordering all kinds of ‘tong sui’; mostly traditional favourites they grew up with. Popular items include: 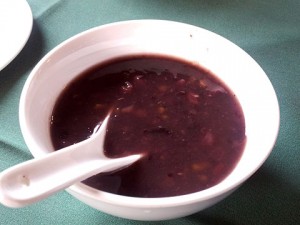 Sweet Potato Soup: Simply boil sweet potato cubes in sugar water with some ginger slices to cut through the sweetness. 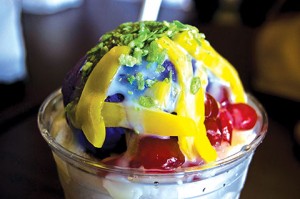