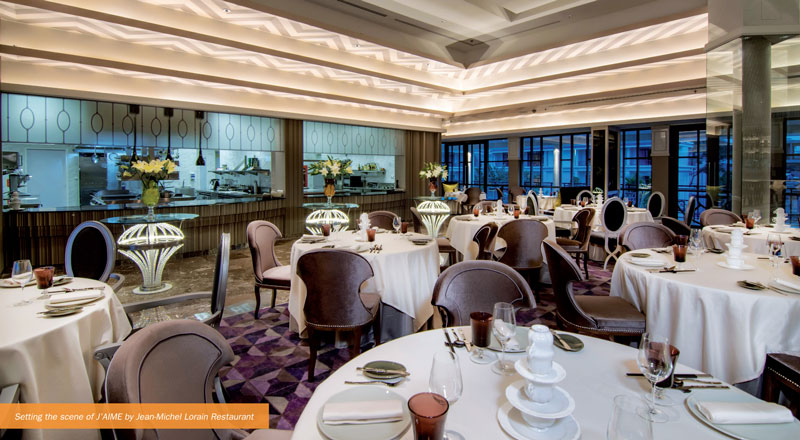 “Decades ago in Paris, if a gentleman showed up at a fine dining occasion without a tie, the waiter would actually lend him one”, said Ms Sylvie Amar. However, times have changed and dining etiquette are not as stiff lipped as before; posh restaurants would still admit ‘smart casual’ dressing patrons. Social paradigms aside, the essence of a fine dining experience remains from the time of Antoine B. Beauvilliers opening the first prominent grand restaurant in Paris; drawing the attention of famous gastronome Jean-Anthelme Brillat-Savarin who said the restaurant was “the first to have an elegant dining room, handsome well-trained waiters, a fine cellar and a superior kitchen”. In its early days, we imagine such restaurants decked out with heavy furniture, grand chandeliers and tapestry to reflect its point of luxury. Of course, designs evolve over the decades and how would one think up an ambience that is both suitable to today’s cuisine and times? 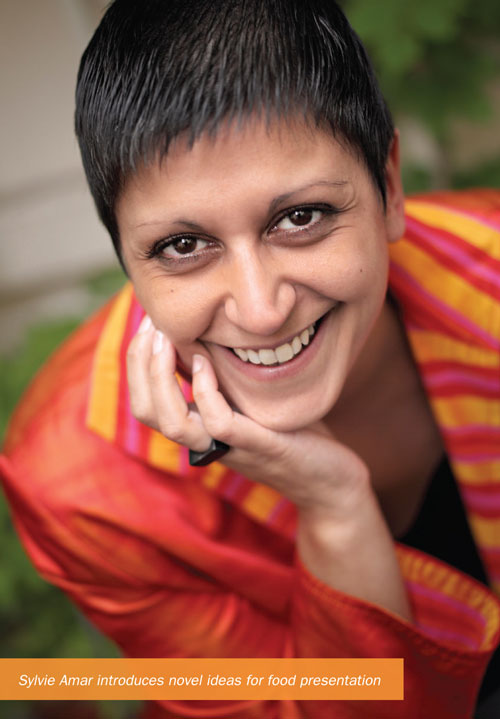 Sylvie, the “designer of French style gastronomy”; describes the process as finding a balance between the spirit of the food from the chef and the ambience. The story really star ts from the chef and apart from talking to the chef, she tastes the food to better comprehend its philosophy and translate it to the storyline. It is then to the drawing board and she constantly asks, “Do we still have things to invent? Today, what drives me is to reinterpret objects and match them with the 21st century’s use”. 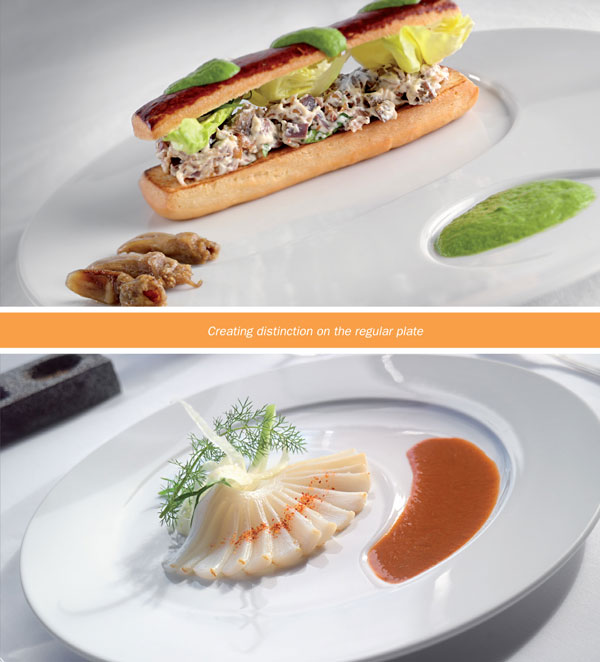 ON FOOD PRESENTATION
In terms of tableware, she studies how people eat today and the food trends, for example burgers have been elevated to gourmet level and thus a really good knife is required or amidst the healthy eating revolution; why not design impressive salad bowls? At the same time, she also sees tableware as no longer defined by the type of food that will be served on them. What used to be described as plates for entrees, mains and dessert; today’s chefs are more open-minded to present their food creatively. Sylvie does not denounce the fundamentals like the white canvas but uses it as her inspiration to rediscover designing plates that will attract attention yet is practical enough for storage.

Polished and shiny, immaculately arranged; not to mention heavy silver ware is one of the hallmarks of fine dining. The need to individually polish them adds to the attention to detail that such dining experiences are known for. Some establishments even insist on having custommade silver ware to set itself apart, perceiving it as a branding exercise, says Sylvie, although some chefs are veering towards wood crafted cutlery for an outstanding look or having partially matt finishes that gives a softer edge to the striking silver. 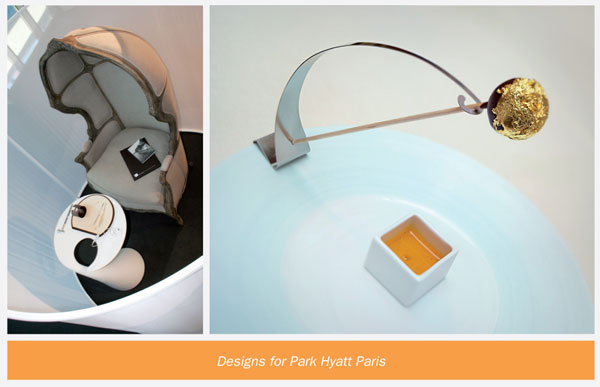 TELLING A STORY
To successfully convey the message, it pays to get into character. Although having the expertise, Sylvie never lets her own abilities drive the designs. By taking time to observe every single person in a F&B establishment; cooks, head waiters, sommeliers and crew, she realises the importance of coming up with the right items that not only inspire recipes, movements, presentation but how it can influence the entire business such as layout of the restaurant and / or buffet line alongside branding materials. When diners enter, you want them to feel at ease thus the lights should be warm and cosy and walls ideally painted with one colour so as to minimise the “mental noise”that can be caused by too many colours or patterns (if using wallpaper). If a restaurant proposes to diners a quiet and intimate meal, even the flooring would need to be considered with carpets the most practical option. Another factor is culture and Sylvie relates that Asia is beginning to adopt fine dining service levels but guests are still keen on identifying with their roots and approaches like placing chopsticks and fork together is a great way to show that a restaurant takes care of the client. Speaking of cultural symbolism, it also plays a role in inspiring her product designs especially those that aren’t client-specified saying, “the history of a brand, its heritage, its values, its uses, the people who use them...it is the immersion within a culture that usually leads me to the right product”. With every restaurant having its unique identity, it is up to the instincts and insights of individuals like Sylvie to come up with the accompanying elements to the cuisine that will elevate the guests’ experience when they are out for a fine dining meal.