the resurgence of BUBBLE TEA

Xing Fu Tang, Tiger Sugar, The Alley, and Tealive – these are household names among the urban millennials, some among the many bubble tea stores out there. That tells us two things – the bubble tea market is driven by strong competition; and the market has a strong demand among consumers. But despite market competitiveness, many bubble tea stores are still witnessing to street long queues and exponential sales every minute of the day!

The bubble tea milk trend which seemingly appeared to have died down sometime ago, was a surprise to many when it made its big comeback in Asia not long ago. A part of its success comes from Internet foodies who made bubble tea a global phenomenon in the recent years. Grab, the ride-hailing giant of Southeast Asia and the transportation network company that runs food deliveries via GrabFood seems to agree. According to Grab’s data, bubble tea orders only within the region has increased at a rate of 3,000 percent in 2018. The increasing consumer demand has become so overwhelming that GrabFood has almost 4,000 bubble tea outlets in their network alone, a notable 200 percent growth in outlets for the Southeast Asia region.
The data also shows that Southeast Asians drink an average of four cups of bubble tea per person a month. Thailand, on the other hand, consumes six cups of bubble tea per person a month, followed by the Philippines with an average of five cups. Following the count is Singapore, Malaysia, Vietnam and Indonesia that consume three cups per person a month. The data also revealed the region’s top favourites, namely pearls for topping, hazelnut for flavour, and the preference of ordering bubble tea during lunchtime.
Bubble tea drinks are designed for the young; its appeal goes out to the younger generation as a way of “viral food” trends. Because “trending” has been an effective marketing strategy especially in the recent years, bubble tea producers are putting more efforts into creating unique concepts incorporating various toppings and flavour combinations to stimulate consumer interest and differentiate themselves from competitors. 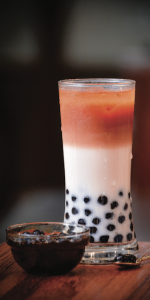 First introduced in the 1980s in Taiwan, the origin of the name bubble tea comes from the milk froth that resurfaces from the shaking of the cup instead of stirring the pearls or tapioca balls typically found at the bottom of the drink. Bubble tea drinks can be a variety of any type of tea, served at any temperature, with an oversized straw. But one perquisite that goes in and makes all the difference for the vendors is the jelly-like pearls, or bubbles according to many.

Inexpensive manufacturing, ease of consumption, ready accessibility, and affordable price are some of the attractions that has made bubble tea an ideal everyday beverage following lunch, during dinner, or just whenever preferred. As opposed to the old powdered forms, teas are now freshly brewed, and key ingredients are made in-store.

WHERE DID IT COME FROM?

There are many tea vendors that claim to have introduced the bubble tea drink which is now one of the world’s most famous beverage. Several tea companies claim to be the creator, so it’s unclear which is the true founder of the popular drink. Yet, the most acclaimed source remains to be Liu Han-Chieh of Chun Shui Tang Teahouse in Taichung. It appears cold coffee was enjoyed by the Japanese people in the early 80s which gave him the idea to sell cold teas. The idea was a huge sensation among the locals that his business expanded rapidly and branched out throughout a vast majority of the city.

The pearls, on the other hand, first arrived in 1988 when Liu poured some tapioca balls during a meeting into his iced teas. It was loved by everyone, and became a well-loved sensation since then. Liu also claim to have experimented cold milk tea by incorporating syrup, fruits, and candied yams into the drink. Another known theory suggests that Tu Tsong-He of the Hanlin Teahouse invented the drink spontaneously, using white tapioca balls where the name allegedly originated. Wherever it started, it’s apparent that the Taiwanese tea industry has taken the world by storm and is not planning to stop anytime soon. In fact, it has forced many traditional vendors to adapt bubble tea drinks into their menus to be a part of this trending sensation. 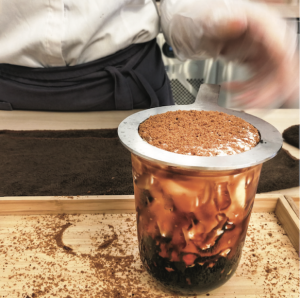 It is still unclear to many how bubble tea drinks managed to take root and grounded itself in different countries across the world while other food and drink trends fade into obscurity. Perhaps, the drink-snack combination ideal for on-the-go keeps Asians hooked. Perhaps, the idea of drinking tea in the form of bubble tea is acceptable as a social norm. In fact, the idea of drinking milk tea is not new to Asia. Drinking and serving milk tea is a cultural practice in most parts of Asia, which has made the acceptance of milk tea less foreign in this region.

Another reason is one that we fathom. The thousand reinventions of the original bubble tea put many in constant awe of how far a bubble tea drink can go, and that it’s not just a drink. Bubble tea has become a staple of the night markets in Taiwan – everyone has a bubble tea in their hands, be it fruit drink or milk tea. Perhaps, it’s also the addictive combination of chewy tapioca balls and creaminess of the milky tea that people don’t seem to get enough of. In fact, with bubble tea variations making appearance time after time, pearls have become the common key ingredient that differentiates one brand from another and keeps customers coming back for more.

Sugar intake has always been a health epidemic in Asia and with the addition of bubble tea drinks, it has only become a rising concern in many countries. The issue of bubble tea being regarded as a high calorie drink gives us a glimpse of the setbacks of drinking bubble tea – its unhealthy traits that come with addictively delicious flavours.

Deconstructed, ingredients such as tea, milk and brown sugar used in a bubble tea can make one assume that it is a healthy drink. However, it often consists of hidden ingredients such as sugar, sweeteners and artificial flavourings. According to Malina Malkani, a media spokesperson for the Academy of Nutrition and Dietetics in the U.S., bubble tea, in reality, is a high-calorie drink with little source of protein or fibre. 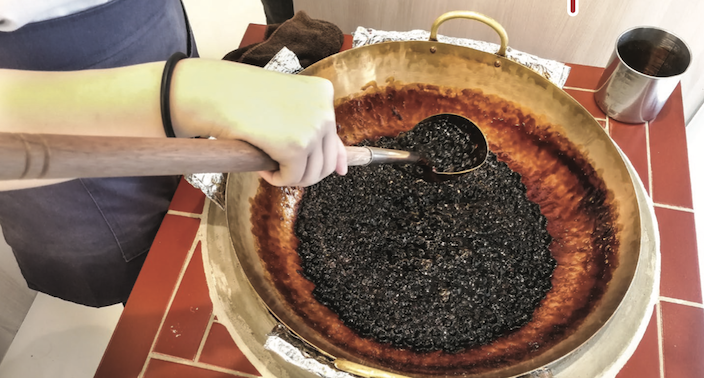 In fact, some dieticians claim that one cup of bubble tea alone can contain at least 370 calories. To analyse the claim, let’s start with the bubbles or pearls that constitute the favourite part of bubble tea. The bubbles are typically made from tapioca consisting of high carbohydrate content. The process of making the bubbles begins from cooking tapioca in hot water together with sugar, for up to three hours. With added sugar, the cooking process can produce tapioca balls that can be served at an estimate of 160 calories per quarter-cup serving.

There have been also various speculations linking tapioca balls to cancer and kidney stones. Although extensive researches have refuted the claim, the tapioca balls are nonetheless hard for the digestion of elderly people and may cause indigestion. Another concern of drinking bubble tea includes its halal status since most brands carry Chinese names.

In Malaysia, Budget 2019 introduced the sugar tax to control and suppress sugar intake levels within the country. Between year 2012 and 2017, sugar intake among adolescents have rose 1.4 times higher, according to the National Health and Morbidity Survey 2017 statistics. Yet, despite the sugar tax, urban millennials are keen on purchasing indulgent drinks such as the bubble tea drinks, as much as many still intend to buy Starbucks beverage that sell beyond RM20. The purchasing behaviour is a surprise to many as bubble teas that are basically “teh tarik” added with tapioca pearls and charged at an average price of RM13.90 is considered “socially acceptable” by many young consumers.

But the key is moderation. Health experts recommend customers to opt for the less sweet or low-calories varieties of bubble tea drinks and to drink them in moderation. This is a work-in-progress for many bubble tea brands as more brands should work towards recreating bubble tea drinks with nutrition in mind without losing the signature appeal and taste – the factor that originally made the drink popular in Asia.

Bubble tea ingredients began to evolve as bubble tea drinks began to spread locally in Taiwan and abroad over the years. Instead of using fruit powders and syrups in fruit-based bubble tea drinks, the use of actual fruits was introduced. Instead of using the usual processed ingredients, more fresh ingredients were used. Now, the modern-day bubble tea commonly comprise of two forms: a fruity, iced tea, consisting of fresh fruit, tea and ice; or a smooth tea with milkshake, consisting of tea, (sometimes) milk, powdered or liquid flavouring, creamer, water and ice. In fact, the chew tapioca balls that used to come in black colour (a combination of brown sugar and caramel) only can now be found in white or other colours, depending on the ingredients used to make them.

Due to the consumption of milk tea when it first came out, more shelf-stable non-dairy creamers made way into the market making bubble tea sweet and creamy. During these times, bubble tea shops often sold green or black tea with milk and at times, some sweetener added. Although this was a popular choice among consumers, the Taiwanese culinary world was always seeking new adventures in flavours and concepts.

Some popular fruity bubble tea flavours are lychee, taro, passion fruit, mango, apple, honeydew melon, and strawberry. Not only these fruit-flavoured bubble teas are becoming increasingly popular among the younger, adventurous, and health-conscious crowd, they have also dominated the bubble tea market analysis in 2018. In fact, the segment is predicted to grow substantially in the coming years due to its high nutritional value as well as aesthetics and diversity in colours compared to the conventional bubble tea flavours.

Tea has also been diversified in the offering of bubble tea flavours. Nowadays, a huge variety of teas is available to customers who seek out adventurous palettes. For coffee lovers who are not so keen on teas, caffeinated bubble tea drinks are available for grabs with options of milk variants and milk free drinks for lactose intolerant customers.

Of course, there’s the cheese tea which is incredibly rich and tasty consisting of cold tea combined with whipped cream cheese that has become a global phenomenon. There’s also the craze of brown sugar pearl milk combining fresh cold milk, brown sugar caramel, and tapioca pearls. In places like Singapore, there’s even a local twist such as avocado and salted egg custard. In Japan, hojicha latte bubble tea is a favourite among the youngsters.

While the origins of bubble tea may not be clear, one thing is certain: the bubble tea trend is here to stay as shop owners continue to reinvent to excite the crowd, both young and old. We also know that we are in the bubble tea bandwagon now – and it doesn’t help that the drinks are highly tasty and addictive!