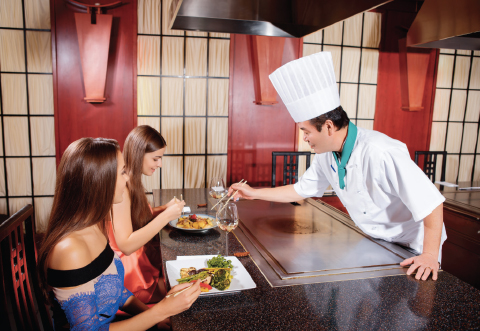 “Like a kaleidoscope, Japanese cuisine is attractive on many levels. It has been praised overseas and prompted the Japanese to rediscover the joys of a Japanese lifestyle. I hope people introduce the excellent points [of cuisine] to the rest of the world.”
– Chieko Mukasa, Food Culture Researcher

For a restaurant, however, there are certain standards to meet to. This includes consistency in providing items that make use of Japanese food and ingredients, as well as promoting the appeal and characteristics of Japanese food and ingredients, righteously. Having said that, let’s take a look at some elements that make up a true Japanese dining experience and how these can aspire business owners to preserve the food heritage of Japan.

COUNTER SEATING
Have you noticed more restaurants over the world are breaking away from the French tradition whereby chefs in general take care of the kitchen, while managers run the dining room and service area? Some restaurants are approaching the contrary, as these restaurants encourage customers to sit at a counter, dealing directly with the chef. The counter seating practice is a direct influence of the Japanese Kappo-style – the chef cooks in front of you and serves you food as it is ready. Sushi bars noticeably operate on this principle, so do many other Japanese restaurants.

Some French chefs are even going forward with this bold move. Joel Robuchon have introduced restaurant concepts (L’Atelier de Joel Robuchon) that incorporate variations of Kappo dining. Meanwhile, Peter Gilmore, one of Australia’s known chefs, runs his Bennelong at the Sydney Opera House based on Kappo dining elements. There are more high-end restaurants across the world that are actually stepping into the counter seating concept – you’ll be surprised. 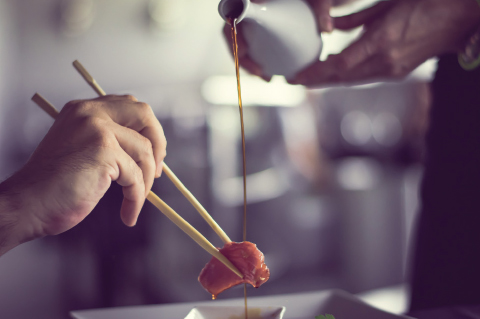 The ingredients typically used are tuna, bamboo shoots, tuna, bonito of earlysummer, herring of spring, matsutake (a type of mushroom), and chestnuts of autumn. And of course, there’s soy sauce too, or shoyu – one of the most important seasoning in Japanese dishes. Although a relative newcomer, shoyu goes into about 70 percent of all Japanese dishes. With that comes mirin, a sweetened type of sake, and other sauces made using vinegar, soy, and citrus.

THE ART OF JAPANESE PLATING
Careful preparation and presentation are two crucial elements of Japanese cuisine. Food is considered an art form and even the simplest dishes are prepared by chefs who have undergone training for many years. Originating from the Kamakura period, the practice of separating all elements into small dishes are mainly adopted from the classical Chinese style of serving food, as well as the way Buddhist tea ceremony is served – a practice that once considered the putting together all food on one plate inappropriate.

According to “The Moral Dimension of Japanese Aesthetics” by Yuriko Saito, aesthetic design is also meant to represent the respect for an object’s innate characteristics and a response to human needs, in a way of promoting a good life and a good society. From the culinary viewpoint, putting food on a plate is a highly codified process. The process holds on to several cultural principles and some accepted plating principles, in order to appeal to the taste sensory and the eye. 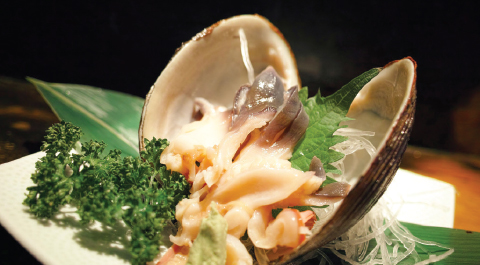 • Empty space (ma)
Plates are rarely fully covered in Japanese dining. The minimum amount of empty space is 30 percent, resounding the concept of empty space in the Japanese culture known as “ma”. Ma stands for the void between things, an emptiness that is believed to be full of possibilities. Known as minimalism in the modern world, this negative space refocuses the attention of the diner by omitting distractions and stimulates a connection from the eye to the palate by provoking the curiosity of diner.

• Arrangement
The rules of moritsuke, a type of serving arrangement, largely dictates the arrangement of food on the plates of Japanese restaurants. The styles are generally underpinned by balance and contrast, as well as ma and seasonality. Hiramori is another style considered highly important in the Japanese dining, whereby food of similar sizes and colours are laid together on a flat plane in a vertical direction. 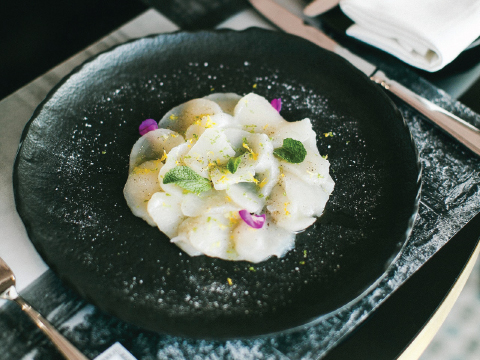 • Balance
A bird’s eye view of a Japanese plate often shows off a visually pleasing arrangement and it’s not because of the presence of symmetry, but rather the absence of it. Asymmetry is considered tantalising and engaging in Japanese cuisines, ushering a sense of peace and harmony when looked at. In fact, Japanese dishes highly value numbers 3, 5 and 7 in plating. Similarly, red, yellow and green are considered the key colours in Japanese cooking. Consider how sashimi is served, for instance. It is typically covered with a shredded daikon radish, laid out in the shape of a little mountain.

• Servingware
While Western restaurants typically sway towards plain plates, Japanese restaurants consider the opposite. Japanese dining enjoys the expression of vessels that come in various sizes, shapes, and colours, made from glass, pottery, and lacquer, often embellished with decorative patterns. As a matter of fact, these receptacles are chosen on the basis of the type of dishes that will be served, and should be able to inspire the dishes.

TASTING MENUS
In high-end restaurants, patrons are encouraged to try the Tasting Menu because it contains all of the chef’s specials. With a choice of two or three Tasting Menus, the dining experience is concluded. The menu style even marks Michelin-starred European and American restaurants these days that we don’t realize that they are actually Japanese in origin.

The idea of the set menu is familiar to many of us. Smaller restaurants all over Asia offer set menus, and when one tries to order a dish individually from the ala carte, it would turn out higher in price. The Japanese considers this unnecessary. With the Tasting Menu, courses can go up to 20 small courses, with at least six courses. Originally an inception of the kaiseki menu style, Tasting Menu has become more popular among chefs globally in the last decade with more restaurants adopting the menu style. 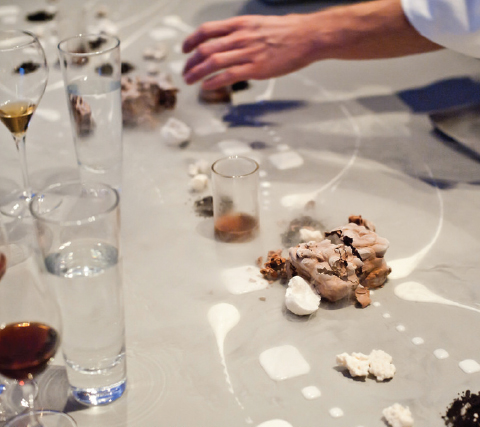 FOOD TECHNOLOGY
Retort pouch food is a phenomenal in Japan, allowing food to be easily prepared by placing the pouch in boiling water. Used in everything from Chinese food to yakitori grilled chicken, The technology to make it was only completed in the late 1960s and was first used to make curry. Now, it is used to make yakitori grilled chicken, Chinese food, and other food items. Using the technique, pre-made food is placed in pouches, heated to 120 degrees for sterilisation, and placed under high pressure which allows longer preservation.

The Japanese have also developed standards and devices for measuring the quality and taste of meat. Shinshu premium beef, from Nagano-raised kuroge-wagyu cattle, for example, is valued for its melt-in-mouth flavour and lack of greasiness. This can be only be achieved by the technology of isolating the chemicals that produce good taste before measuring them and setting standards for different grades of tastiness.

Another known technology in Japan is the Cells Alive System (CAS) freezing technology that keeps water molecules in the food moving, eventually preventing cell damage. The machines are widely used on tuna fishing boats and can even freeze fresh cream, something that was once thought to be impossible. Pioneered by Chiba-based ABI Co., the company has plans to sell its own line of food frozen using the CAS method.

PRECISE KNIFE TECHNIQUES
There are two things about Japanese chefs that deserve much reverence – disciple and dedication to the craft of cooking. It can take 10 years of training for someone to become an itamae (sushi chef). And Japanese chefs are quite serious when it comes to their knife handling and development skills.

The composition of the knives, however, are different from the ones used in the Western world. Japanese knives are designed in such a way that movement is made with the whole arm, rather than bending the wrist. That makes Japanese knives centrally balanced instead of being top heavy. On top of that, Japanese knives are sharpened only on one side, making them appropriate for right- or lefthanded people. Having said that, here are some prominent knives in Japanese cooking:

1. Originating in Osaka, kamagata usuba has a distinctively curved tip suitable for performing intricate vegetablecarving methods, as well as juliennes.
2. Deba has a broad and wedge-shaped blade that can easily cut through bone and cartilage, making it suitable for less delicate kitchen tasks like butchering poultry and breaking down whole fish.
3. Usuba is considered the most versatile of traditional Japanese knives. With its origin in Tokyo, the knife’s wide blade is well suited for slicing vegetables.
4. Also developed in Tokyo, takobiki is customarily used for preparing octopus and sashimi.
5. Yanagi is used mainly in the preparation of sushi and sashimi due to its elongated blade and a slightly curved tip that makes it ideal for producing paper-thin slices from fish filets. 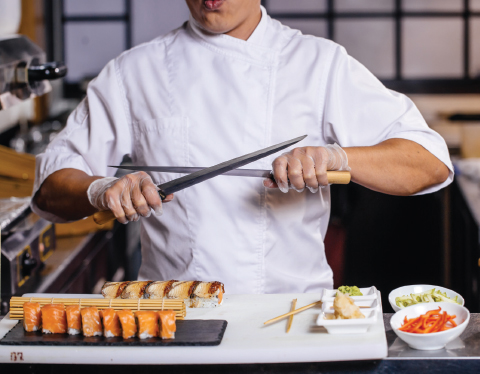 HEALTHY EATING HABITS
A recent study by the British Medical Journal found that the Japanese diet high in grains and vegetables, and moderate amounts of fish and soy with minimal fruits and dairy, showed reduced risk of death from heart disease, stroke, and cardiovascular disease. In fact, the traditional Japanese diet is largely fresh and unprocessed, with very little refined foods or sugar.

The positive results has a lot to do with the Japanese attitude towards food too. Instead of having one large plate, they often eat from a small bowl with several different dishes. The Japanese also believe in “flexible restraint” – the freedom to enjoy treats and snacks from time to time but with the restrain of having them in smaller portions.

Yoshihiro Murata, the owner of Kikunoi Honten, once said that his restaurant has received an increasing number of inquiries from non-Japanese who want to learn Japanese cooking. Only in the past two or three years, about 10 cooks from Italy, Spain and other countries have visited Kikunoi Honten, bringing forth the request. At the same time, Japanese words such as “umami” and “dashi” have become commonplace among cooks in Western countries. That only tells us that the Japanese food culture is never coming to an end, unless the world ends, and we are secretly happy about that!