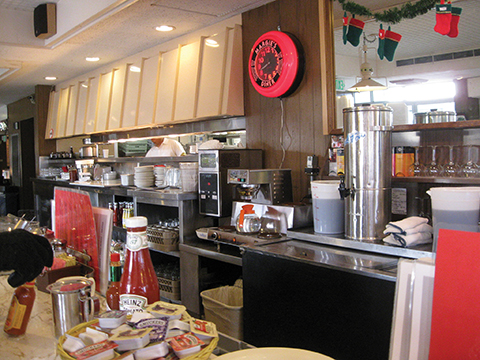 AS we move in top speed into an age of information and transparency, open kitchen format restaurants, also known as show or display kitchens; or what some have dubbed ‘middle of the house’ have been drawing much attention, and is beginning to be set an uphill trend for many foodservice outlets in recent years, from fine dining to quick-service restaurants like Domino’s that is set to remodel nearly 11,000 restaurants worldwide by 2017 to a ‘Pizza Theatre’ format, where pizza lovers can watch their pizzas being prepared. Franchised eateries like Subway have mastered it and, Burger King recently opened their open format BK Grill Garden. It provides customers direct access to information about the establishment’s hygiene, professionalism and culinary excellence. In fact, transparency is a trend impacting business decisions at many levels and arguably is the key driver behind open kitchens. But, how did the open kitchen concept begin to develop? 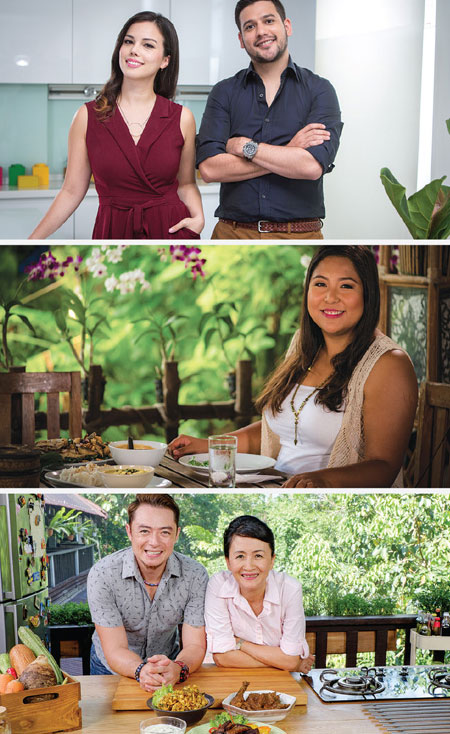 THE INFLUENCE OF POP CULTURE
Cooking shows have proven to be extremely successful from back in the day with the likes of James Beard, who was the first American televised cooking show host in 1946 where only ten per cent of Americans owned a television. In fact, his gourmet skills were decades too early for audiences to enjoy. Another noted television personality that brought French cuisine to television was Julia Child in the 1960’s. As decades went by, Asian audiences were of course inspired by traveling chefs Bobby Chin and Anthony Bourdain. Now, ever y nation has got their own television chef to look up to what with the launch of the Asian Food Channel in 2005 broadcasting to over 130 million viewers across 13 countries: Brunei, Cambodia, China, Hong Kong, Indonesia, Malaysia, Mongolia, Philippines, Singapore, South Korea, Taiwan, Thailand, and Vietnam.

Getting in the habit of watching chefs at work on television has obviously boosted the fascination with what goes on in restaurant kitchens. As more and more chefs become well-groomed television stars, handsomely paid authors, assertive product peddlers and boldface gossip-column names, the open kitchen is a dual-purpose pedestal, allowing them to preen and their fans to gawk, clap and be amazed as chefs and creative ways fresh and exotic ingredients are thrown in the mix, consumers increasingly look to enhance their dining experiences by being par t of the flames and steam, and organised chaos in the kitchen.

IS THE OPEN KITCHEN CONCEPT MADE FORYOUR BUSINESS?
Closed or open kitchens require good design of workflow to ensure efficiency. But with open kitchen concepts, operators are only able to control some aspects of food production; as there are additional elements you’ll need to be aware of. Your new set up requires you to either rebuild, remodel, redecorate and reorganise within its an existing shell. Locations of doors and windows, electrical outlets, columns and partitions will all be major considerations as you think about your space plan. Mistakes made in your restaurant’s design can be more or less easily repaired or redesigned. However, when it comes to important kitchen installations such as water supply and drainage, electrical wiring, gas supply and other installations, then you may be facing a bigger, more expensive task at hand. An open kitchen concept has to have the combination of all details in a restaurant operation that lead to a certain image with your customers. In a 2005 New York Times article, Barbuto in the West Village’s executive chef, Jonathan Waxman expressed that, “Restaurants can’t get by these days on just food and good looks.”

YOUR KITCHEN CONCEPT IS BASED ON YOUR MENU
No one knows his way around the kitchen better than your chef; your brand new menu reveals everything about the process of preparation and what kind of restaurant equipment is necessary. He will also know where and how to position people from his team for maximum efficiency. But when the process is par t of the show, chefs need to be more meticulously detailed; and your designer will need to take functionality and showmanship into account. With all these information in place, your hired designer can take advantage of said knowledge to design the kitchen to be the most functional. Thus, planning is indeed essential so that your activities behind the counter do not disrupt service hours. This is one of the most important factors that influence in the time savings for cooking meals, minimise unwanted spilling, and reduce accidental risks in the kitchen. But, do keep in mind that when hiring a chef, their professional experiences vary; most traditionally trained culinary chefs are trained in a closed kitchen environment where there are standard rules they adhere to. An open kitchen bends or breaks those rules which may result in changes in the food production process. Make sure you work very closely with your hired chef; many drafts and rehearsals should be done before finalising your open kitchen design.

KEEPING TEMPERATURES UNDER WRAPS
Restaurant kitchens are notorious heat traps - especially in cooking areas, where temperatures in front of a busy grill can top 40 to 45 degrees Celcius. The best way to combat sweltering heat is a combination of ventilation, circulation and hydration.Your HVAC system functions best when it’s clean; this keeps you cool as well as compliant with health department and fire safety regulations. Now, that your kitchen is exposed, check regularly for grease, dust and other build-up throughout the entire system and per form maintenance, such as replacing filters and vacuuming ducts, as needed. Ask employees to report any unusual room-temperature changes, which may be the first sign of a developing problem.

TAKING NOTE OF ENERGY CONSUMPTION
Your kitchen design directly affects the energy consumption. This is one of the most important factors that you need to consider now that you’re planning a concept that brings both the kitchen and dining areas adjacent to each other. Keep away tables with the cooling system for the preparation of meat and other foods that require low temperatures during the preparation from electric cookers and ovens. Also, all refrigerators and ice makers should be as far as possible from equipment for cooking and baking. This provides minimal energy consumption and safety for processed foods. When choosing electrical appliances pay special attention to energy consumption for each of them. The high cost of electric appliances with low energy consumption are cost effective in the long term.

Unlike a closed kitchen where heat is kept away from the dining area and your air-conditioning operates at a probably lower level, open kitchens on the other hand keeps your exhaust system working twice as hard absorbing the air in the environment. This includes the cool air from the room, hence your temperature controlled air conditioner might be working over time to compensate the loss of cool air and overcoming heat coming from the kitchen - wearing out your air cond and also using more power to maintain the temperature. To achieve a perfect balance, exhaust systems are one of the most important investments. This also affects the sound coming out from your exhaust system which might not be comfortable for some guests or spoils your environment. 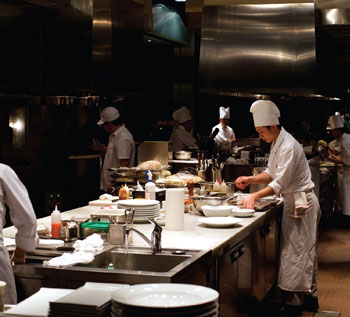 EASY MAINTENANCE IS KEY
Maintenance here would be the quality of the equipment. It wouldn’t be aesthetically pleasing for customers to see equipment that have worn out knobs, panels exposing insides of machines, or tapes holding certain parts of the equipment. Equipment must be a sturdier quality with par ts easily replaceable should it be necessary. Open kitchens will also give you a lack of walls to put shelves up. So, in the beginning stages of the design, consider placing storage only on the bottom half. And, storage here would need to be designed to cover both tools and cutleries, and ingredients. If you decide to keep storage away from the main area, invest in ways you want to transport these items when chefs need them. Specific trolleys for tools and also trolleys to move semiprepard ingredients from your production to your main kitchen.hours. This is one of the most important factors that influence in the time savings for cooking meals, minimise unwanted spilling, and reduce accidental risks in the kitchen. 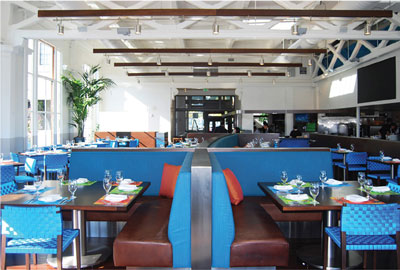 GETTING TO KNOW THE SCIENCE OF SOUND
La Mar Cebicheria Peruana in San Francisco, hits ever y fashionable trend in restaurant design. The 300-seater occupies an 11,000 squarefoot loft space in a historic conver ted ferr y building. The floors are hardwood, the ceiling beams exposed, and the wood tables bare. It has an open kitchen and a large bar. A wall of windows overlooks the bay; which results in being the ultimate noise trap. Many of the most cuttingedge, design conscious restaurants are introducing a new level of noise to today’s already voluble restaurant scene. The new noisemakers: Restaurants housed in cavernous spaces with wood floors, linen-free tables, high ceilings and lots of windows - all of which cause sound to ricochet around what are essentially hard-sur faced echo chambers. 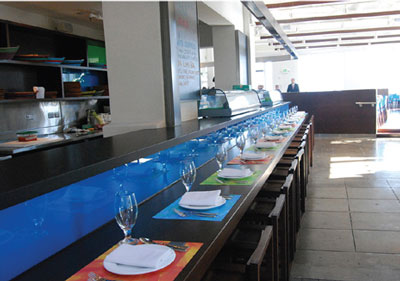 TED speaker and Sound Agency chair, Julian Treasure gives a basic frame of questions restaurateurs should ask themselves to help drive acoustic decisions:
• What are people trying to do in this space?
• What is the environment like?
• Is the sound system good enough for what you want to do?
• Who are the people? What do they like?
• Is there a brand or some values you want to express with the sound?

“When you think about those things, then you understand the way sound affects people,” explained Treasure. ”Is it a place for light intelligent conversation? Or is it a place where kids get together and shout over loud music? All of it’s good, but one size does not fit all,” he concluded. 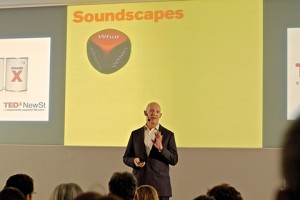 DISCREET DISPOSAL
Chef Sear worked with Garland to provide a sixty-two-piece island range. He found the standard finish of the equipment quite satisfactory with no real need for brass or copper extras. True undercounter refrigeration was installed. In place of stainless steel, the kitchen’s tables were topped with black granite. Granite is not only aesthetically pleasing but also solves the problem of light being reflected onto the rain wall from within the kitchen. With a desire to keep the kitchen clean and clutter free for its onlookers, have the granite customized further with holes cut for garbage cans to sit underneath. Discreet undercounter shelving was additionally installed. Also, if your kitchen runs for a whole day, removing rubbish in the centre of the room has to be clean and efficient