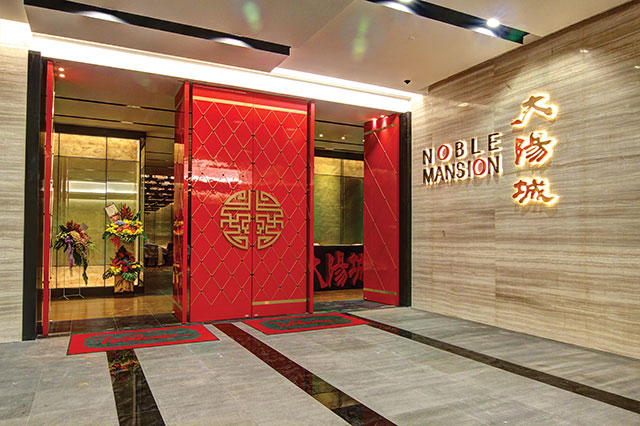 Although we mentioned earlier that many Chinese dishes are cooked ala minute over high heat; there is its delicate side where simplicity takes centrestage. For example, this chilled crab meat with truffle dish from Noble Mansion; one of the 9 outlets headed by Chef Justin C.K. Hor of Oriental Group of Restaurants. A combination that focused on freshness; it was given the X-factor through a presentation using dry ice that is out of the ordinary Chinese plating where everyone would take from one huge plate. 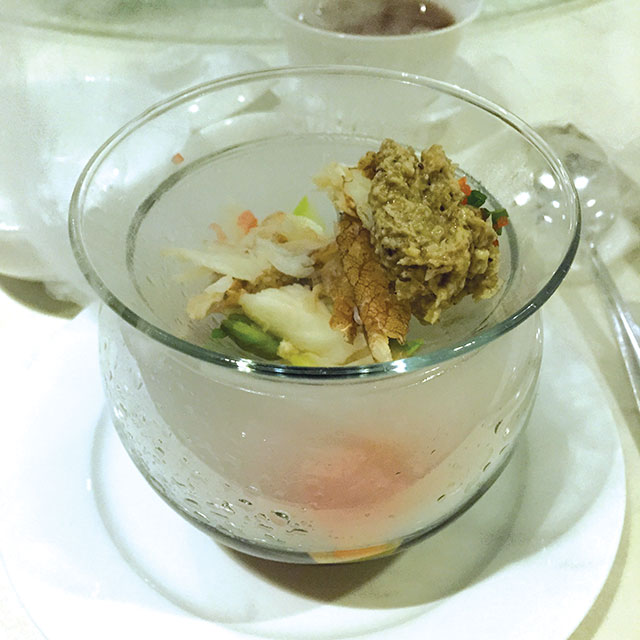 The co-founder shared that he started to introduce individual plating from year 2000 when the first restaurant opened and said it faced some resistance from diners. The restaurant would offer an option of sharing or individual plating in the beginning but as diners became savvier, they began to appreciate the new approach, taking home a more holistic experience – quality ingredients cooked with good taste and stylish presentations. 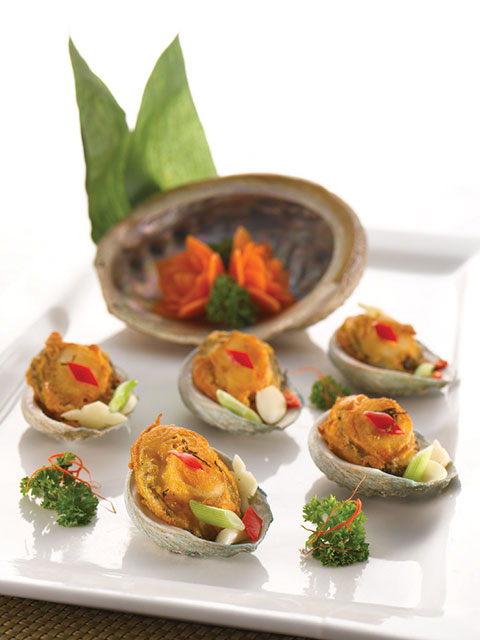 Chef Justin shared that Western style plating is now gaining ground not only for its aesthetics but it lessens the burden for the back-of-house. Elaborate carvings used to be part of the show but it is now increasingly difficult to find experts, let alone the time to do so when the kitchen has more guests to serve than ever before and not forgetting the heavy demands in the banqueting segment. It was simply an evolution and adaptation to today’s environment where chefs are more insightful in packaging and understanding of ingredients as well as how food affects peoples’ psychology. In terms of ambience, the Group endeavours to create a different look for its restaurants. Diners can experience spacious banquet areas at Oriental Pavilion, private rooms at Noble Mansion, modern elegance at The Han Room, neighbourhood friendliness at The Ming Room to the convivial atmosphere at Maju Palace in line with family breakfast sessions (popular with dimsum). 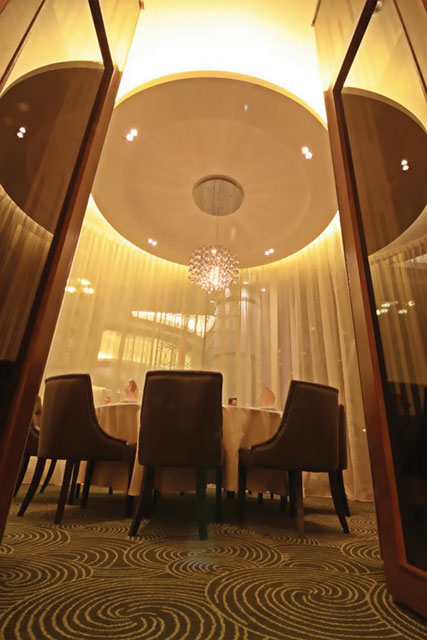 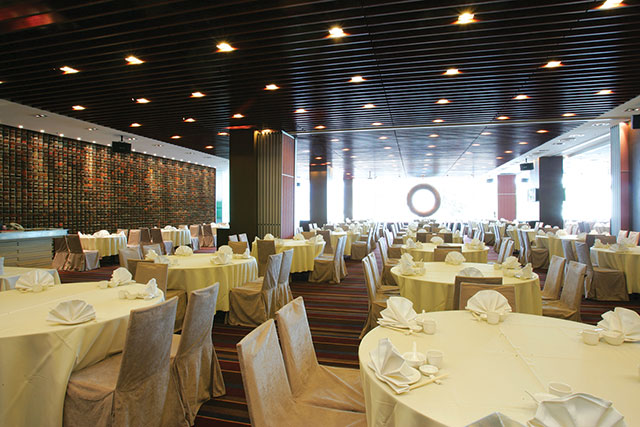 No stranger to Chinese cooking, Chef Justin begun his career as an apprentice when he was only 15 years old. Working his way up at various restaurants, he eventually trained under a Hong Kong chef in Shanghai Palace and Dragon Court before heading the Chinese kitchen at the six-star Tower Club at Raffles Place in Singapore at age 28. Sensing that Chinese food is still very much in demand back home, he returned and set up the above mentioned Group with a few partners; opening its first outlet simply named The Oriental in year 2000, which grew steadily and Noble Mansion its latest opening in 2013. 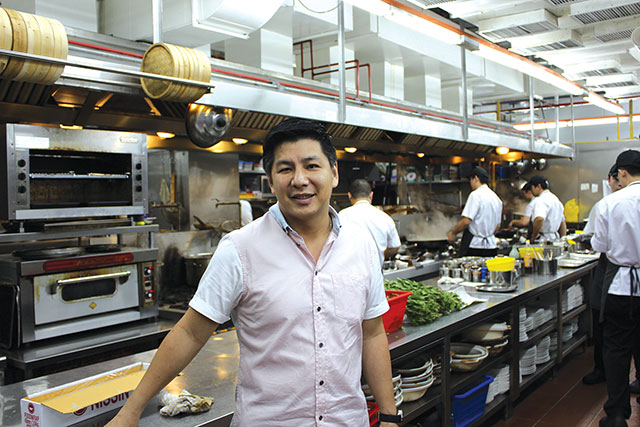 Similarities between Western and Chinese cooking more or less end at the presentation as we did not see any technology-inclined equipment in the kitchen. Although not resisting technology, he prefers an experience-led cooking, saying, “most of my chefs have worked with me for a significant period and I continue to train the younger ones up. To me, executing a competent dish is about finding the FEELING in which only you know whether you got it right or not”. In line with that, he says there are typically two camps of chefs whereby one is about seasonal products and the other about flavour profiles. While not placing comparisons on either the seasonal or flavour expert, Chef Justin said that flavours have longevity while seasonal products stand to be affected by various factors. The latter is more partial to adapt his senses to any ingredient, finding the ways to bring out the best in it, even though its properties may not be optimum at certain seasons. 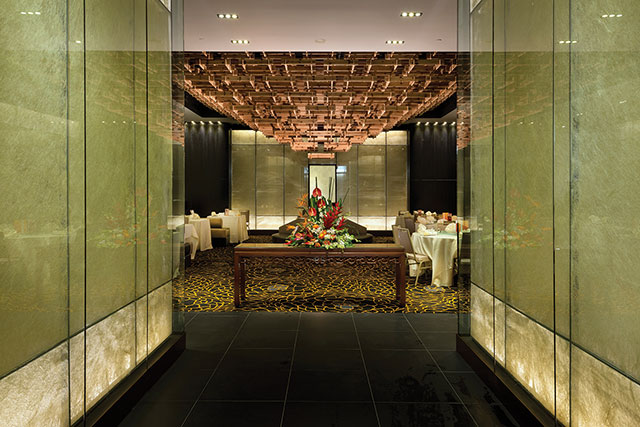 With 9 outlets to look after, evidently the question of centralised kitchens came up. After all, the menu is 70% similar across all restaurants with the remaining percentage set aside for individual specialities. For example, Noble Mansion is known for Shunde cuisine which is considered the birthplace of Cantonese cooking while Maju Palace is popular for its halal dimsum. In the days of labour shortage, one would think having a central kitchen makes sense but Chef Justin is not considering that option at the moment because he strongly believes the value of a chef is perceived from the technique he continuously harnesses; at least from his culinary point of view.
Having said that, he does find different ways to minimise workload by partnering suppliers who will prepare the produce and vegetables and these ingredients will reach the kitchens cleaned, gutted or cut as requested. It makes economic sense by not having to operate and maintain individual cold rooms for each outlet that will cost more, at the same time improving revenue for their suppliers.

With over 30 years of experience, Chef Justin is an example of one who learnt the ins-and-outs from getting straight to work. This was the way most Chinese chefs started as there was a lack of schools that taught culinary arts of such; plus it was an occupation that wasn’t deemed desirable. However, he says things have certainly changed and he does get juniors who studied the philosophies of Chinese cuisine in institutions, a positive sign that perceptions are shifting. Ending the interview on a sweet note (desserts!), Chef Justin believes that Malaysia is a country where food business will not fail, if done right and his passion for the craft and sense for business is evident through his efforts of upholding the art of Chinese gastronomy.