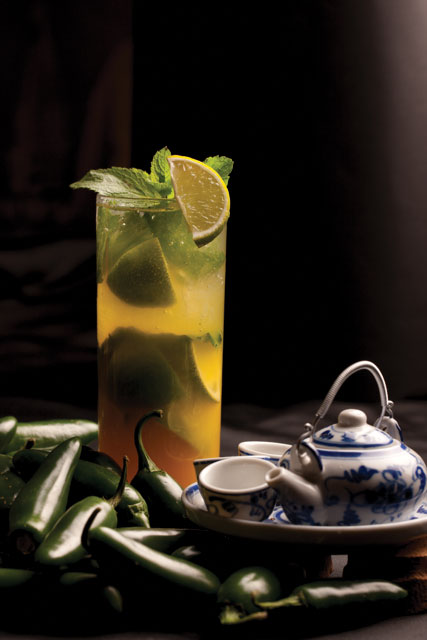 Shahaf Shabtay,
inspired by Asian
food and way
of life.

Unwinding to National Geographic’s lifestyle channel one night that featured Sasazu Restaurant, we knew we had to talk to them and find out how it combines both worlds to an extent – European culture and Southeast Asian cuisine. Having such a concept in an unlikely location definitely raised doubt and curiousity which has undeniably paid off for founder Shahaf Shabtay. We caught up with him on Facetime and delved into why Southeast Asia (SEA) is not just about gastronomy but a lifestyle; expressed in Sasazu’s role as a venue for music, learning experiences (cooking classes, yoga), as well as relaxation (spa and lounge). 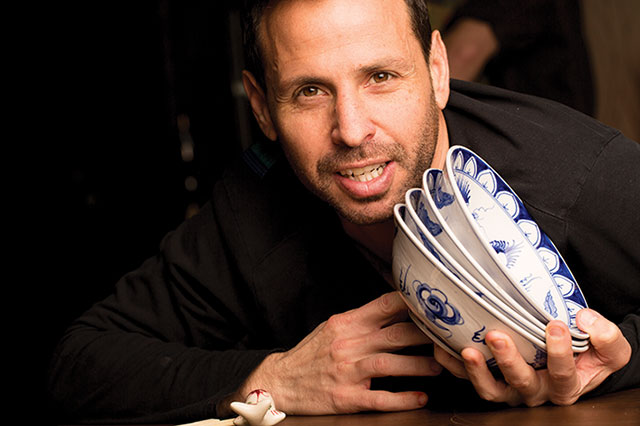 His foray into Asian food began in Thailand. Joining a few friends, they opened a cooking school but in retrospect, he probably learnt more of the country’s cooking culture. He was then contracted by restaurant Vakzuid from Amsterdam to set up its Mumbai establishment named Zenzi before returning to his home country of Israel to start his own food business. After some time, the challenge of unfamiliarity called out again and in 2006, Shahaf found himself in Prague. The enthusiam to revive and re-shape the perception that Asian food is cheap and uninteresting resulted in Sasazu’s opening in 2007. Within 3 years, it gained recognition in Prague Post as the Best Asian Restaurant and in between the years many accolades followed with the latest one being in the 2014 Michelin Gastronomic Guide – Bib Gourmand Category. 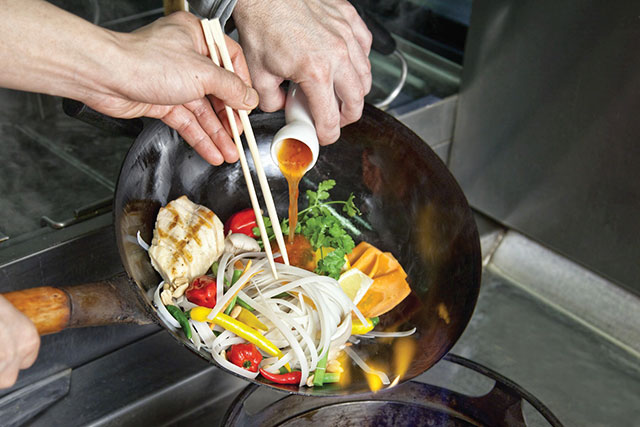 The art of a good stir-fry

Given his stint as an intern at the Odeon restaurant in New York and night classes at the famed Chef Daniel Boulud bakery, Shahaf should have no problems with Western cooking yet he said that it was too rigid for his liking. “Asian food is more free, each day can have different outcomes. A lot of our cooking is based on technique and knowing how to bring out the best in ingredients we have.” Speaking of which, Shahaf believes in being in the shoes of those on-the-job which is why he once spent 7 weeks in Cambodia learning the intricacies of paddy farming and why each grain is so significiant as well as observing how home cooks find a creative balance when working around the different ingredients they might have daily.
This philosophy is the motivation behind his relentless pursuit of introducing SEA cuisine to Europe and admittedly it was a difficult process when he began but as the society became more open and exposed to various cultures; they warmed up to the idea and embraced the diverse flavours of not only the food; but the Sasazu way of life. The menu is founded on five main elements of Asian cooking and ingenious combinations to find a creative balance in showcasing unique traits of each country in SEA.

SAMBAL: a dish representing the fresh zing of Asian produce; base ingredients typically include shallots,chilli, ginger, lemongrass, turmeric, kaffir leaves and is served as a condiment.
OTAK – OTAK: banana leaves is the important vessel to wrap fish, usually with coconut elements to be steamed or fried and these method / ingredients speaks through various inventions.
FLAME: representing energy in Asian cooking, it is an art of tossing the wok and fire control to maximise flavours from ingredients
ROTI: using the principle of baking bread (as well as other items) in a 500°C degree stone oven popular in Indonesia, Malaysia, India and Singapore
TAI-TAI GRILL: bringing out succeulence and flavours with the hot grill 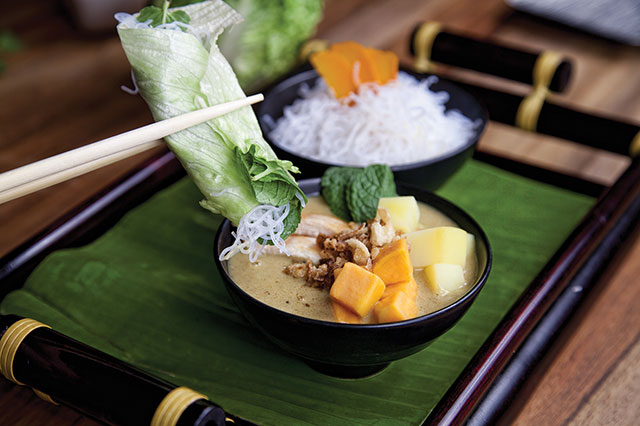 The eclectic offerings at Sasazu does present its set of challenges in execution. When it comes to ingredients, Shahaf tells us that a good percentage are imported which means a streamlined purchasing system should be in order and advanced planning required. To establish a trustworthy relationship, he usually flies in suppliers who would bring products for the team to test before signing a long-term agreement with the most suitable supplier. 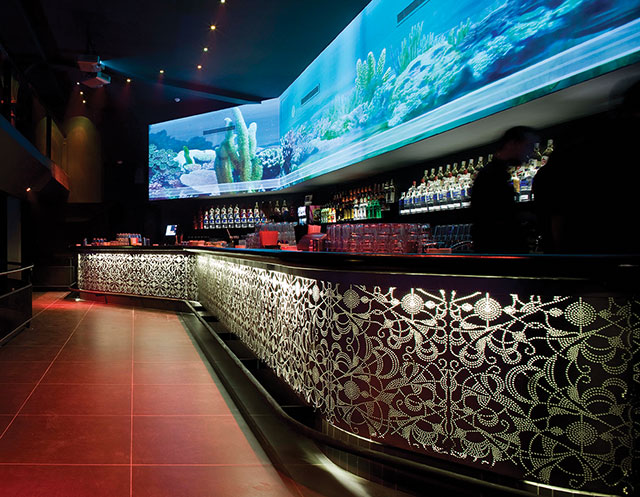 In an essentially European-dominated cuisine landscape, there was much work to do in designing an Asian kitchen as the Western system would not do as well to bring out the Asian flavours; especially when one talks about high heat and flames. To Shahaf, bringing in the key people like architects, Consultants and people well versed in Asian kitchen equipment was vital to getting it right at first go. On the service side, Chefs come from all over the Asian continent as their inherent understanding and mindset on ingredients and food will truly bring forth the message of Sasazu.

Having said that, there are some regulations that Shahaf had to comply and work around with. For example, learning to live without his preferred wooden chopping block. A traditional tandoor (clay oven) was also not allowed in Prague due to the extreme heat it emits. What did he do? He ‘broke down’ a traditional Italian pizza oven by overriding its thermostat and adding water into the cavity to create the kind of steam needed for tandoor cooking. Or building an insulated room to recreate the properties of an Apollo oven for roasting meats the Chinese way. These are just some of the restrictions the restaurant had to navigate but as Shahaf says “everyday is a different challenge. The tomato is not the same everyday” therefore you have to be quick and find ways to prepare the ingredients to be as close as how it tasted yesterday.

BRANDING SASAZU
Shahaf has since established three other restaurants – Beograd Hotel in Belgrade, Bago in Cambodia and a Sasazu branch at the Roses Boutique Hotel in Rhodes. The plan is to bring the Sasazu label beyond Europe as he finds cities like Myanmar and China to be more complex to tackle due to their background. His challenge would be; how to introduce ideas to the origins you derived it from? Yet, this is what drives chef-consultant-restaurant operator-father-husband Shahaf Shabtay in telling the world that the Asian experience does not begin and end with dining but at Sasazu, it can be a time of learning and application in daily living. 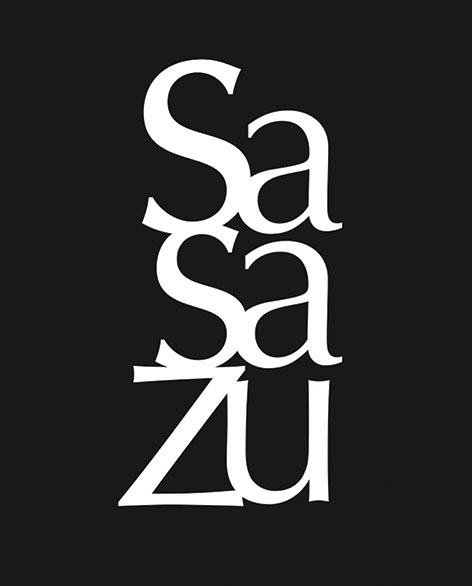