the world of ASIAN KITCHENS 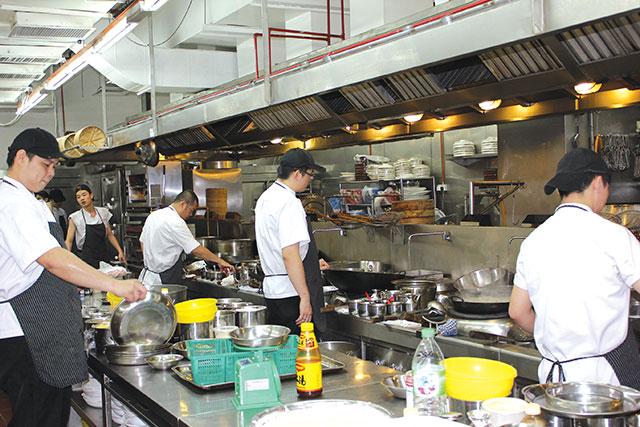 Like its gastronomic fare, the Asian kitchen also sets itself apart in terms of menu execution, layout and equipment down to the roles of each person in the team. Here’s a quick look at some differences in workspaces.
QUICK AND TECHNIQUE-CENTRIC
Order a stir-fried vegetable or meat in a Chinese restaurant and very likely the wait won’t be long and food arrives piping hot and glistening. Many Chinese dishes are cooked ala minute and to further learn the working mechanics such a kitchen, we visited Noble Mansion, one of Oriental Group of Restaurants’ 9 outlets.
The tossing of food and clanging of ladles against the wok while simultaneously controlling the fire is not a mere showcase but are elements combined for a tasty dish full of “wok breath” (wok hei in Cantonese). Hence, the Chinese kitchen is a hot place to be in with high flames bellowing underneath the burners, deep-frying in an open wok as opposed to electric fryers and steam coming out from high pressure steamers.
In a technique-centric environment, Mr Justin C.K. Hor, Group Executive Chef opines that a Chinese Head Chef must get down to cooking daily to maintain his skill. Although he oversees 9 of the Oriental Group outlets, Justin still cooks every night compared to an Executive Chef of a Western restaurant who might have more paperwork to do. There is also less defined stations compared to its Western counterparts with only 3 stations namely; pastry, cutter and cooking station. Similar to a commis in the Western setting, a cutter not only cleans and cuts but is also tasked to assemble all the ingredients required in a dish for the chef. 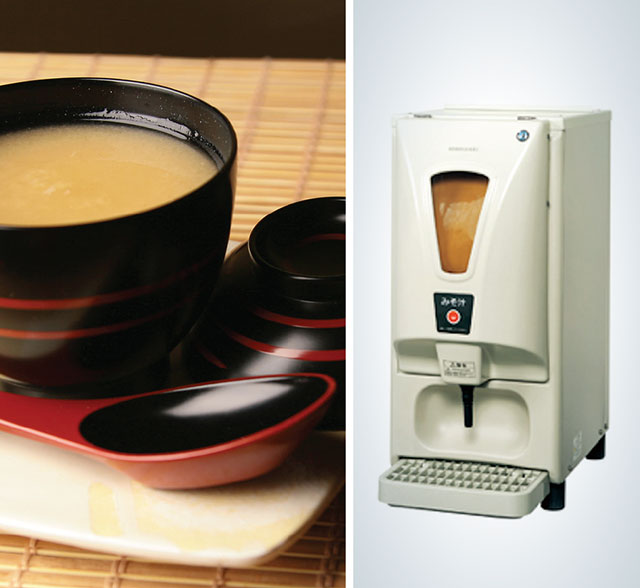 We also noted a high-pressure steam cabinet which is a regular feature in many Chinese restaurants; particularly for banqueting as it cooks 50 fishes at one go, for example. Bamboo steamer baskets are used as they are effective in absorbing excess moisture to prevent condensation from dripping on the food. It is also possible to steam various items at one go by putting foods that take longer to cook at the lowest level and faster-cooking ones in the upper steamers. Inexpensive and environmentally friendly, it is also space saving as they can be stacked up for storage. 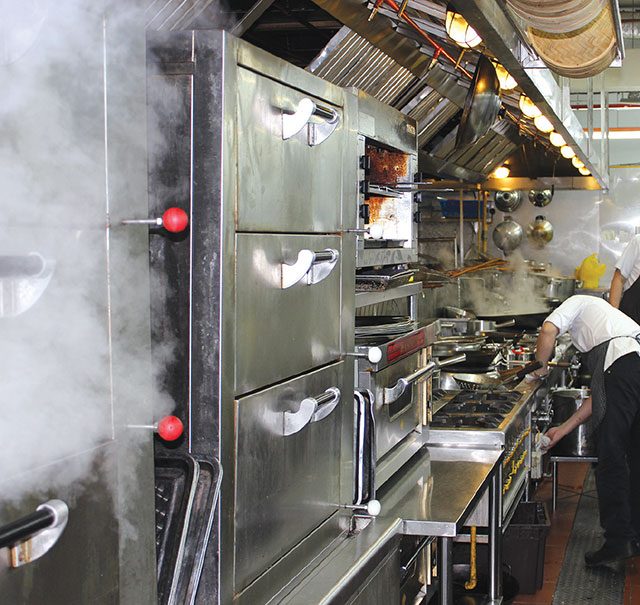 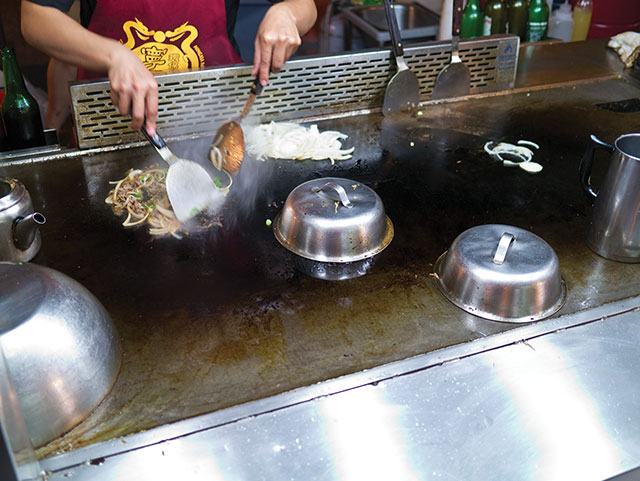 Enjoying a slice of raw fish in a Japanese restaurant? Sashimi preparation might look like simple slicing of but its an art to master – how to sear, cure or even how thick to cut the fish will decide if the sashimi experience is memorable or otherwise. The sushi chef might have a station in the middle of the service area to prepare orders and showcase his skills, particularly in premium restaurants where customers would not accept fresh seafood having made its rounds at the belt. For casual dining, sushi conveyor belts would be the most effective way to serve food without needing extra service staff and provide convenience for individuals in a hurry (or hungry ones). In Japan, many are using countertop miso soup dispensers that work by dispensing a set amount of miso paste and water per portion. This helps to reduce space for a stockpot, labour and wastage.
There is also the Teppanyaki style restaurants where food is stir-fried on a flat plate in front of the customer.

SLOW AND FLAVOUR BUILDING
Ask most gourmands about Indian cuisine, the answer would most likely involve ‘complex’. Indeed with the array of spices that go into one dish and the act of tampering to release its flavours, many restaurants tend to cook a huge portion and keep it aside. Specific portions are heated upon order and this practice is applicable especially for meat dishes that take a long time to tenderise. This method of working is also employed by most Malay restaurants as well where most operate self-service style by displaying an array of dishes in
trays over a bain-marie. Therefore, these restaurants are likely to be equipped with huge pots for the kind of amount it cooks.
Seafood and some vegetables are cooked ala minute. The Indian kitchen will have a tandoor oven that cooks with heat generated by charcoal burning within the tandoor cavity to expose food to live-fire and convection type cooking. A hot griddle is used to cook more delicate Indian delicacies like dosa (crepe made of lentils and rice flour), capati (unleavened flatbread) or prata (flour based pancake with ghee) are cooked on a hot griddle. 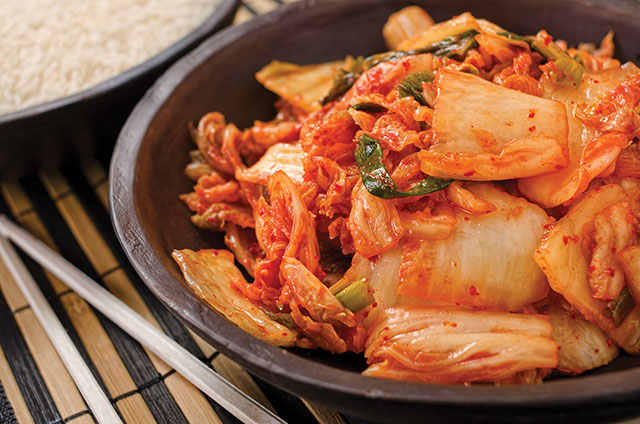 The Koreans are mostly about extensive preparation as well especially in its signature condiment of kimchi where vegetables are layered and pickled for various durations to achieve different flavour profiles. 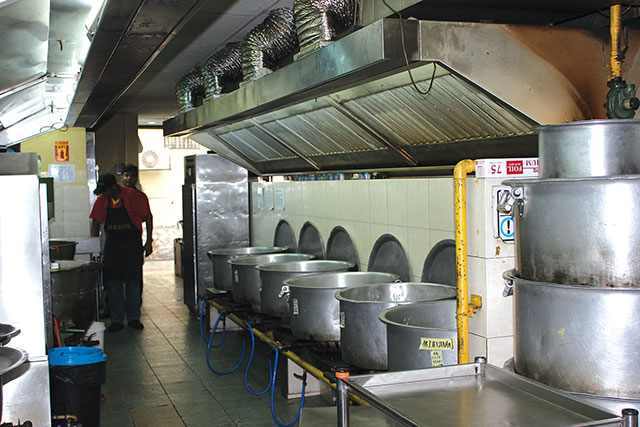 Before service, much of the work goes into cooking up the variety of side dishes or collectively called banchan that can rotate each day, depending on the availability of ingredients as well and are refillable as many times as the customer wishes. Main dishes are served quickly as they are either rice or noodles with soups where the base is already prepared and ingredients added upon order or quick stir-fries. Korean cuisine is also popular for grilled meats at the table installed with a BBQ system and some places might also fix ventilation units above each table to improve the environment. 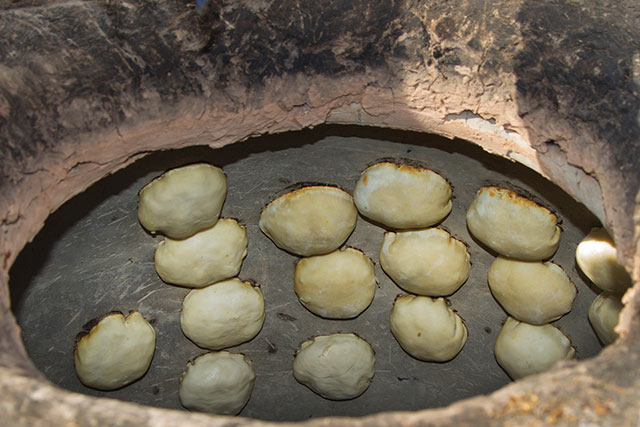 Next up, chefs and restaurant managers share their experiences in running a foodservice outlet specialising in Asian gastronomic feasts. 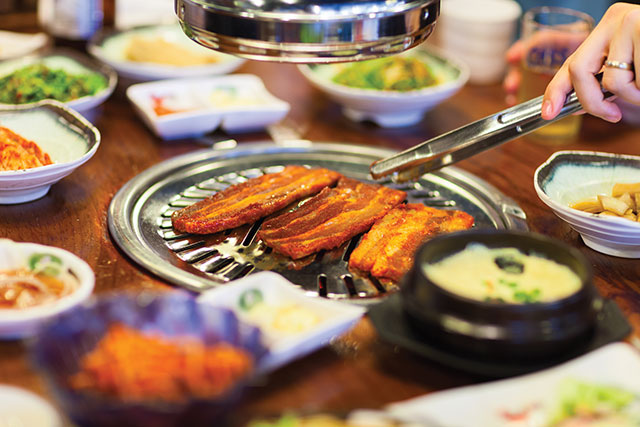 Korean BBQ setting with side dishes